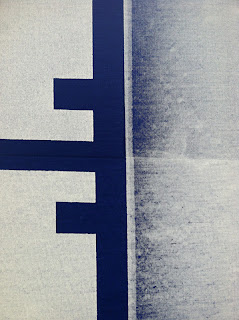 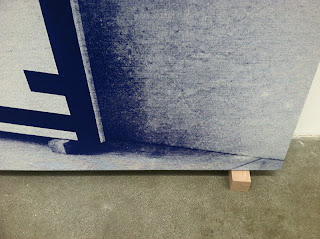 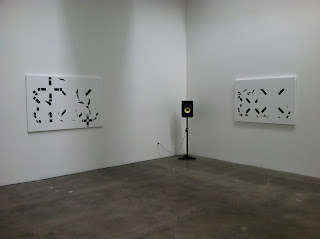 Aside from the "standard" disclaimer about over-crowded group shows, perhaps especially of the summer variety, there were a few artworks in this show worth considering discretely despite the difficulties in viewing them as such.  Regarding such challenges in particular, Sean Paul's paintings with a speaker from another piece inserted in between the work and the slightness of Yngve Holen's sculptural installation---muddled by other works in the room---were not served well by such dense installations, unless, of course, we were to consider the show as such and assumer a larger narrative where "standard operating procedures" equals chaos. I certainly hope not; I wouldn't think so.  We've seen enough attempts at "standardizing" in this region as of late.  That said, the images of the four artist's I include here represent what I think are nice moments and positions within viewing them.  Questions about presentation and re-presentation, systematic actions, bodily currents, and reflexivity all make for what I would propose could be "standard" (read: perpetual) human concerns for less uniform purposes in another show, just these four.
Posted by Justin Lowman