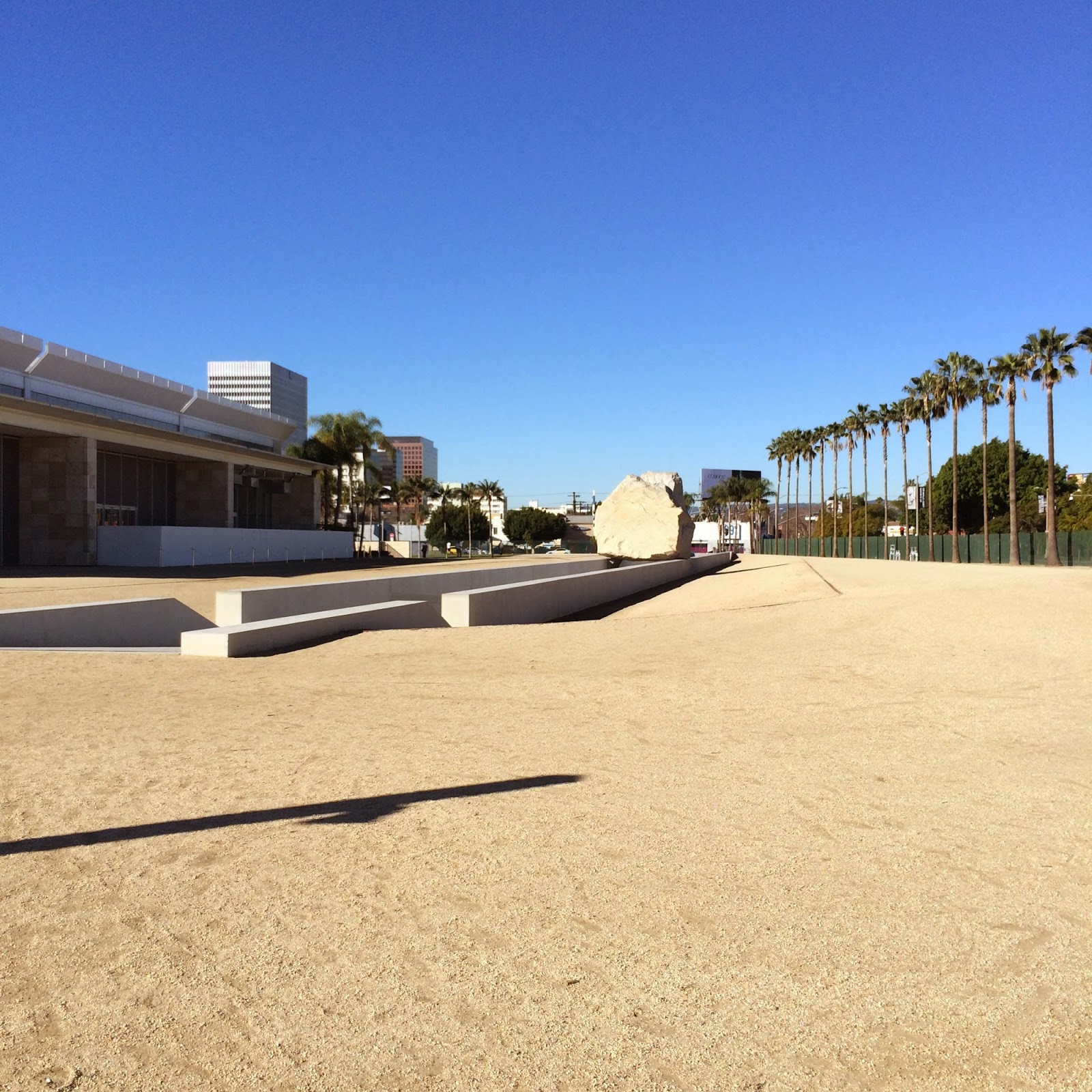 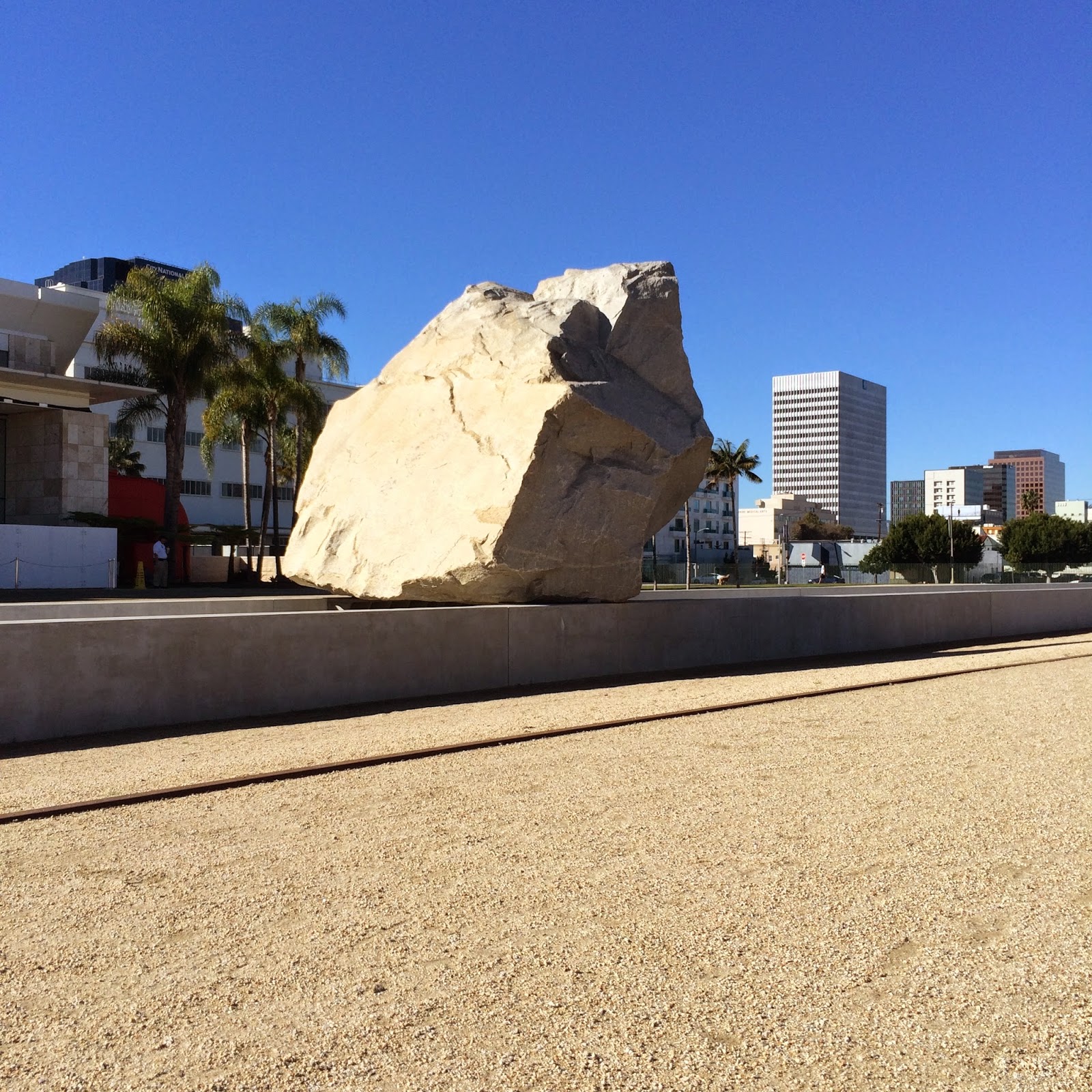 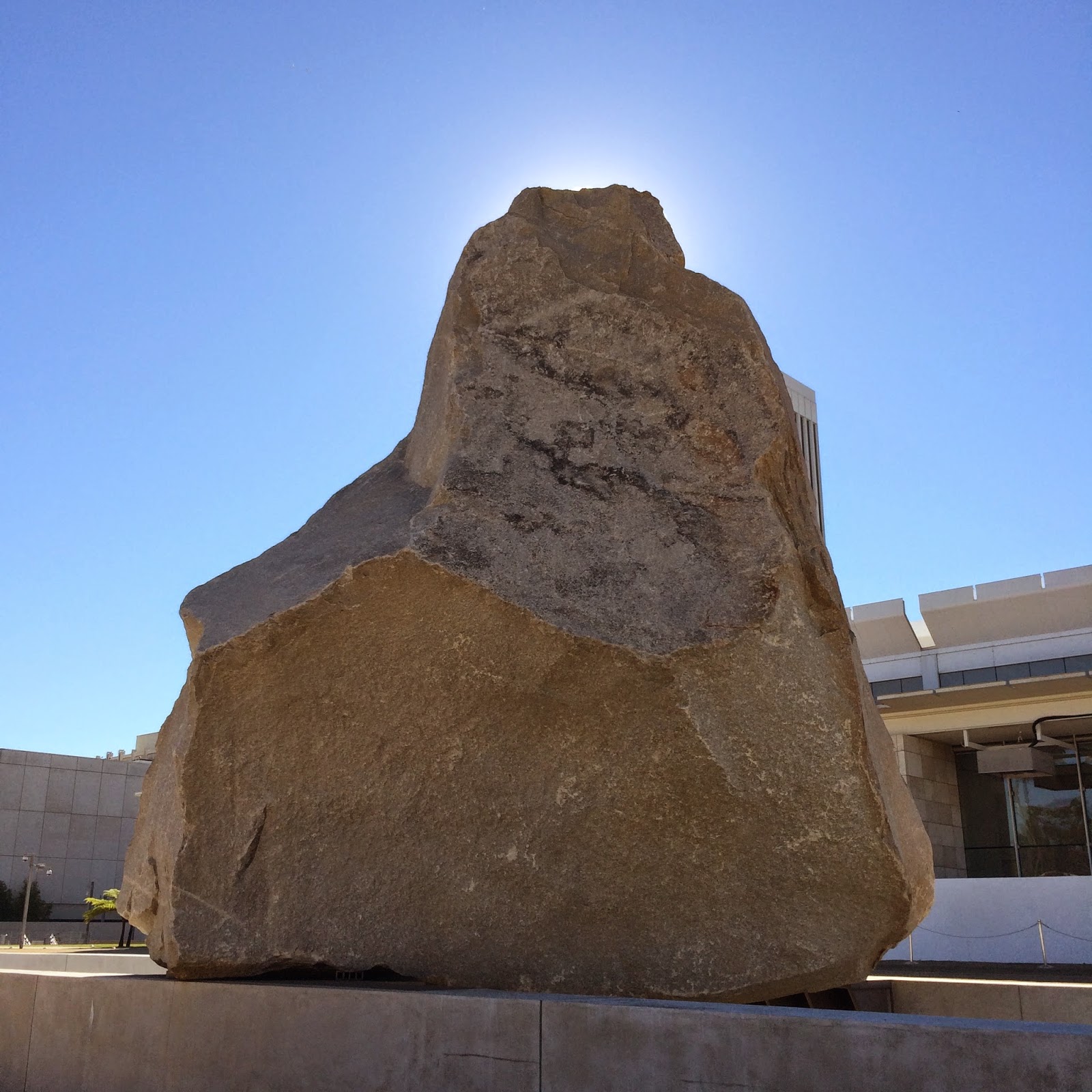 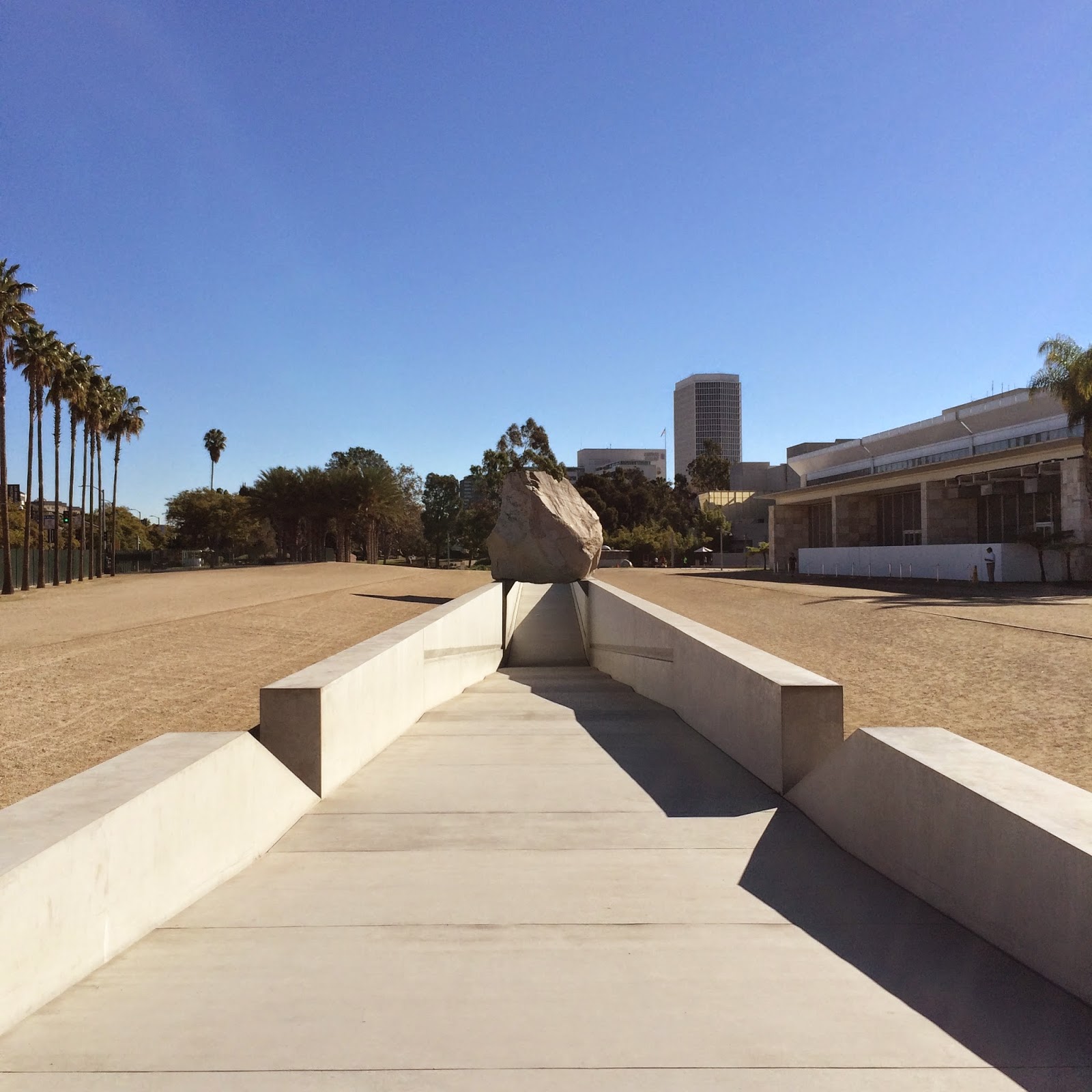 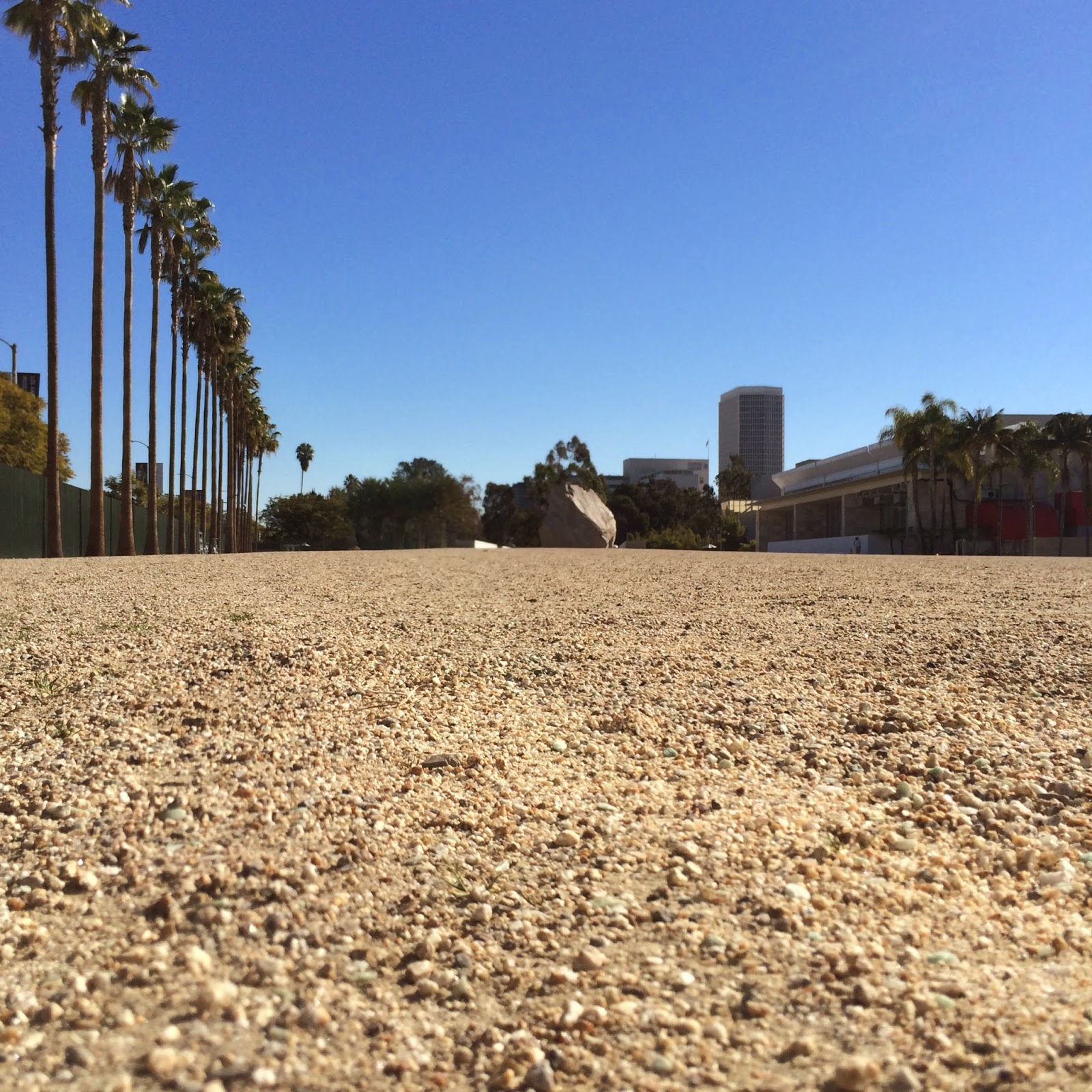 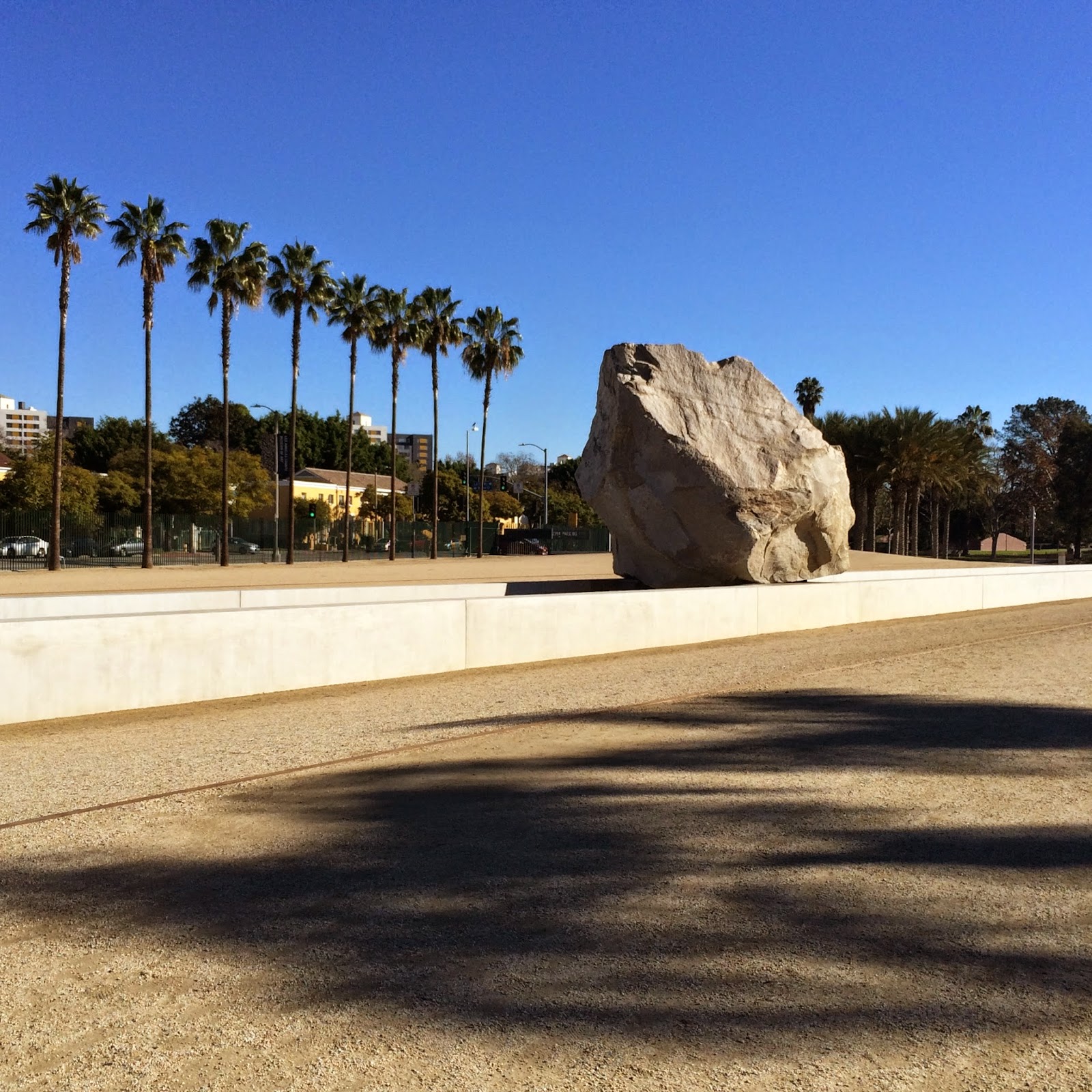 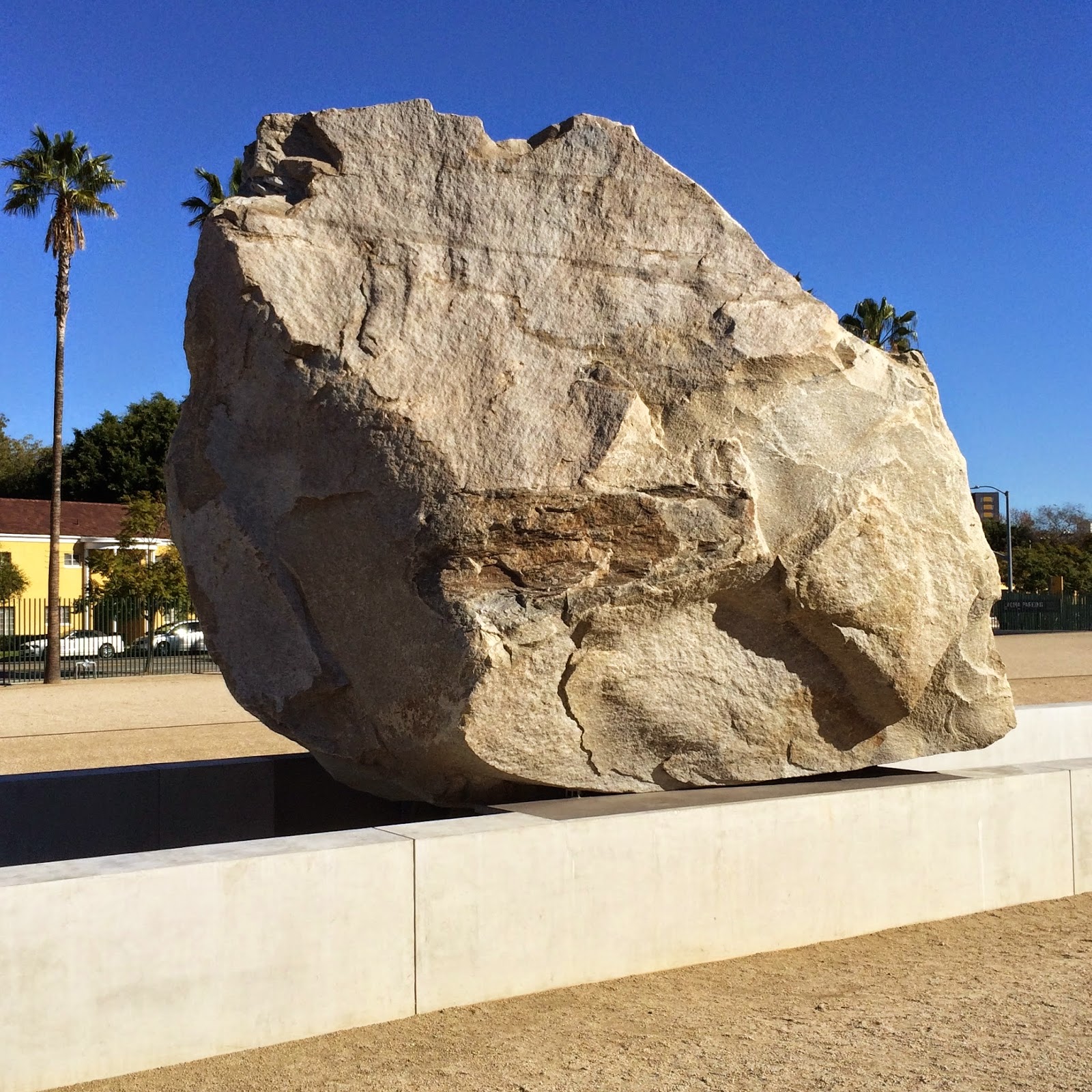 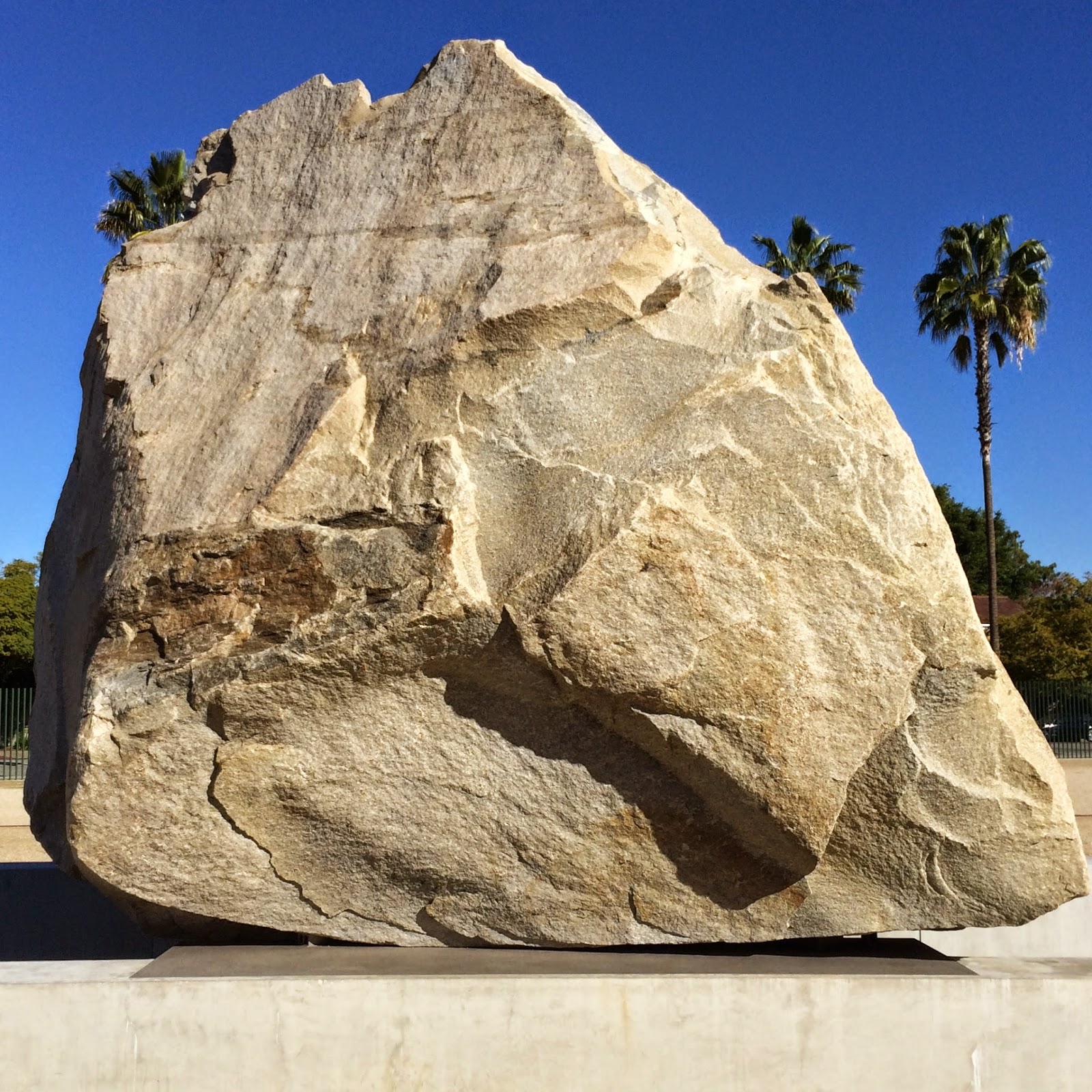 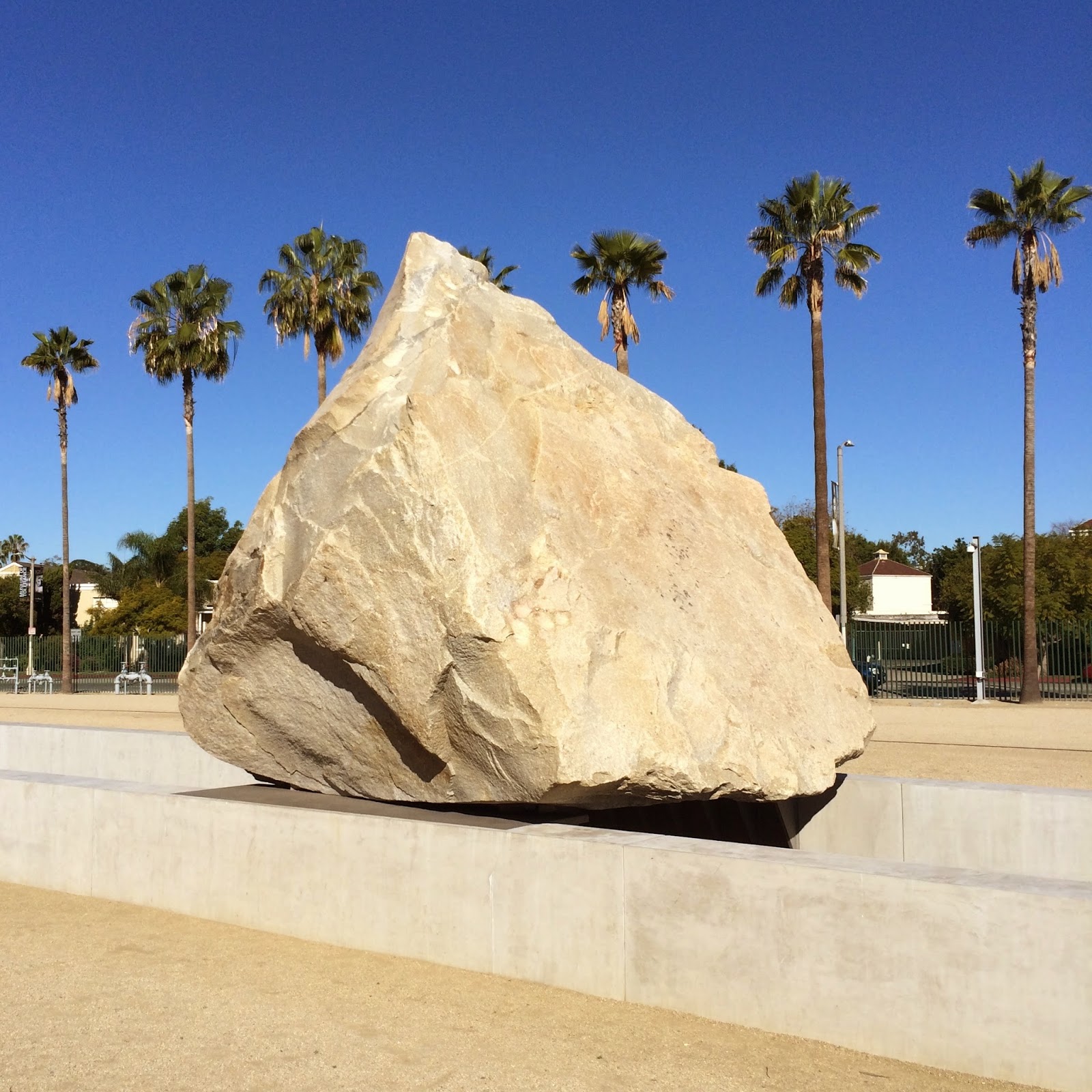 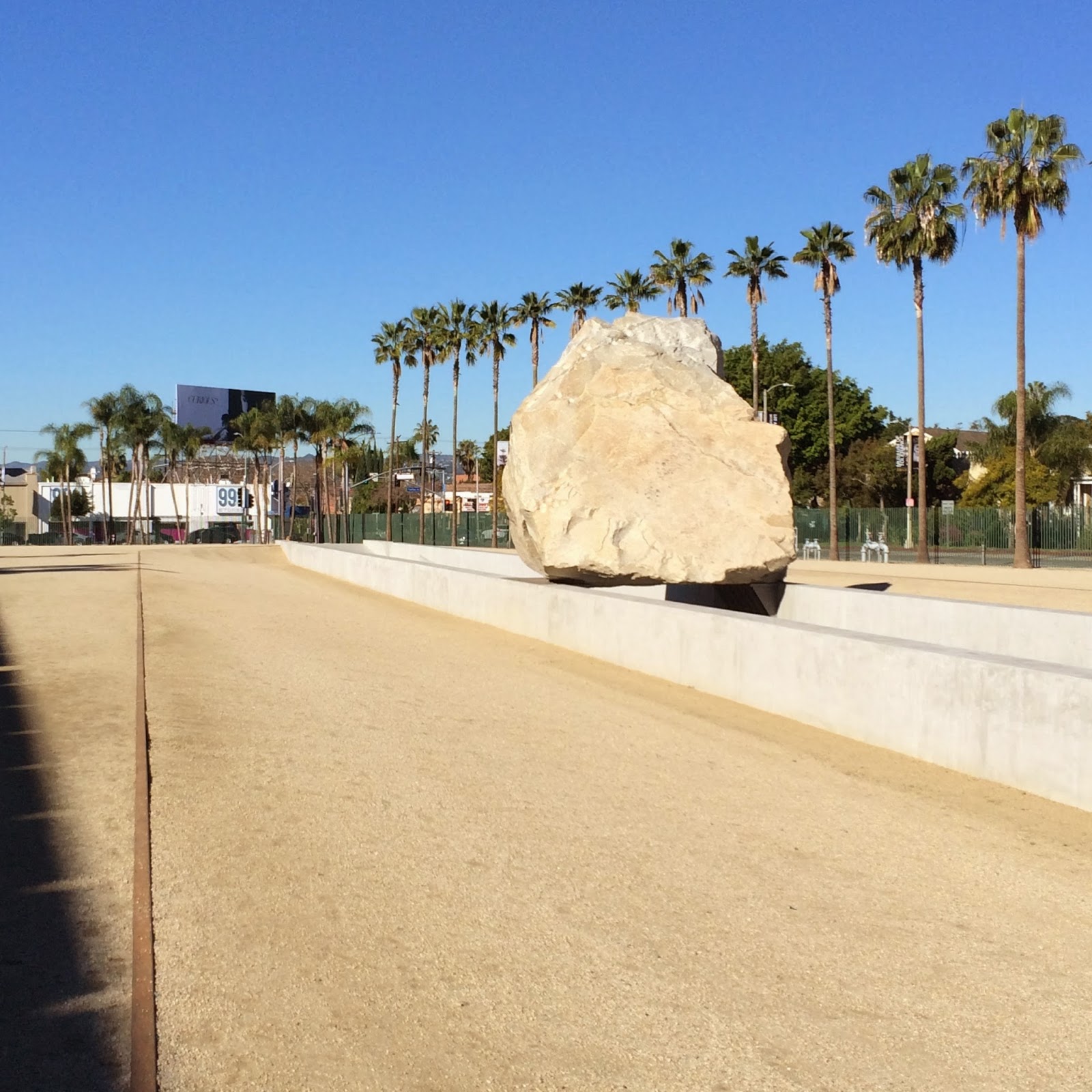 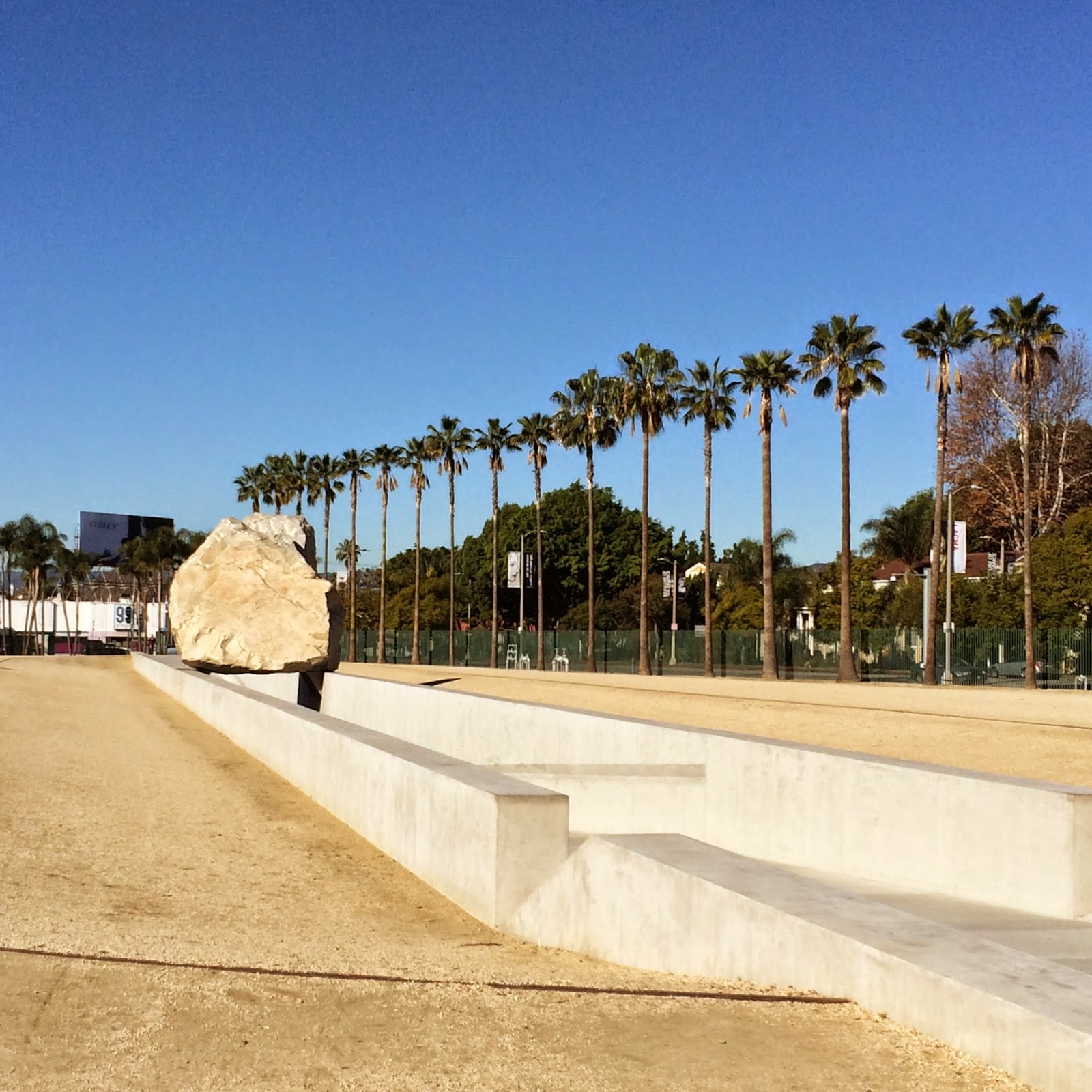 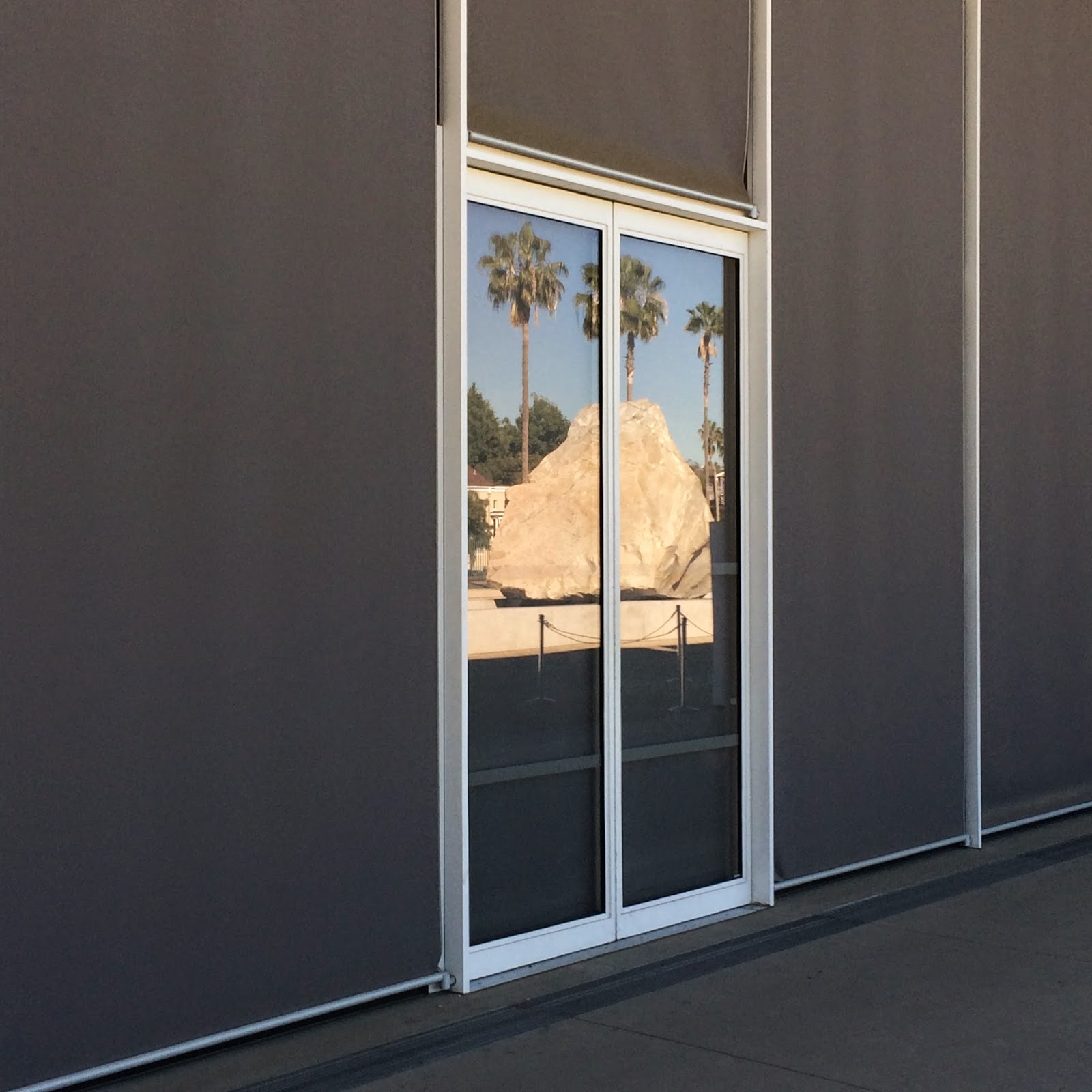 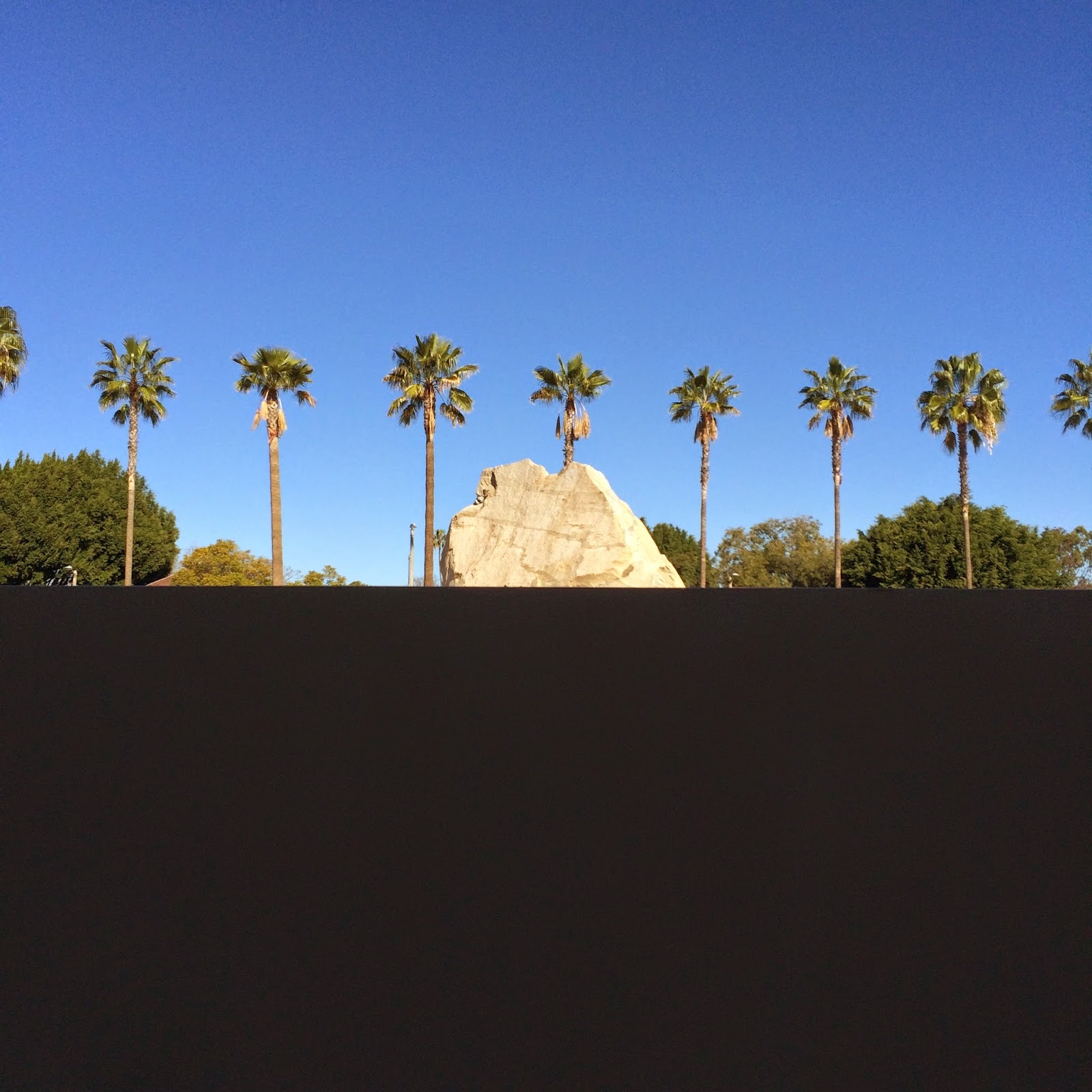 Since LACMA announced and broke ground for Heizer's "Levitated Mass," I would occasionally peek through the screened fence of the construction site to check on progress (see other posts, as follows:

Then, after the official unveiling, I returned at some point and was largely underwhelmed and disappointed, mainly because I found the steel mounts such a distraction to appreciating what I assumed was Heizer's intent, at least where sublimity would be concerned. From what I know of the artist's precision for every detail and nothing before its time, I'm surprise that he went with these mounts. I guess I need to look into this more... See the following link, though there's not much to really see here:

Then, upon arriving to view the Pierre Huyghe exhibition recently, something about my approach to the museum and catching "Levitated Mass" at this particular time of day drew me in a little, and it struck me as time to take a more considered look.  However, I didn't take a closer view actually, because as mentioned, I was less enthused about the style of mounts (presumably an institutional concession and I'm guessing not the only solution especially where aesthetics are concerned).  I wanted to take a look free of such annoyances.  So, I decided to take a longer view with the photos that I share above.

In addition to enjoying how the sunlight reveals the nuances of the multifaceted stone, I also liked the scale complications between decomposed granite pebbles below in the foreground and the tall buildings beyond, all a function of distance and camera angle with some notion of connected materiality. As I was removing myself to go "inside" the Huyghe exhibition I noted the "mass'" isolated reflection amongst the palm trees (second to the last image above). Then, once during the "exterior" portion of the Hughye exhibition, I glanced the eclipsed stone from the above the museum wall (the final photo).  Not quite sure what I liked, something compelled me to conclude by including this one.
Posted by Justin Lowman