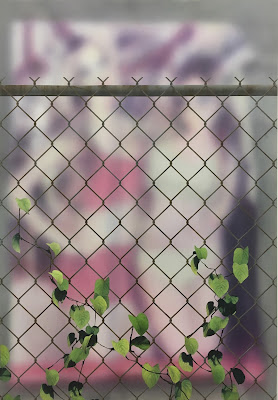 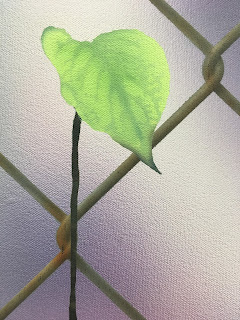 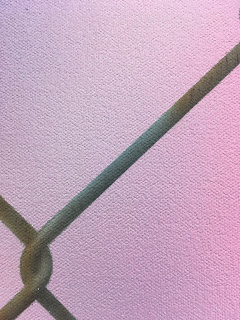 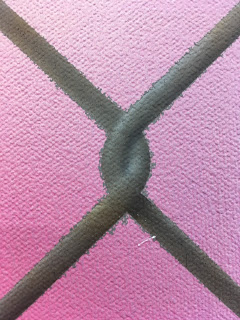 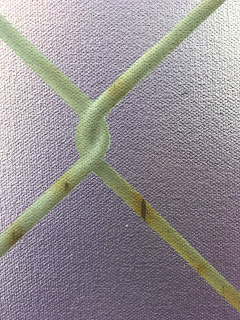 I've been curious about Sayre Gomez' work since seeing some work at Las Cienegas Projects several years ago (see image below).  Getting a handle on panting and its view, which is to say its pictorial space as either illusion (window) or painted object (door) seemed straightforward enough. The quality and care put into the work is also as interesting as the ideas that circulate around the work.  The works seem mostly about how things seem, how the pictorial space is simultaneously window and door, which is to say a represented thing and an impenetrable space, one which would seemingly take time to solve. The work is focused, literally, on such barriers and how one overcomes what's near to access what's far.

In the case of the images above from this most recent show at Ghebaly, we are asked to think consider a delicate and delicately painted screen that accommodates the organic, natural process (growing, unwieldy ivy) as well as cultural barriers, fence and fuzzy images of what seem to be two women, elements of a built environment and bodies that secondarily seem either virtual or real.  Seemingly, getting past the first barricade will lead to the next one, one that painted space promises, in part.  Hard to tell which is which, which is nature, which is culture, which is in, which is out? This is what may keep a viewer engaged, and odd sense of being familiar with such concerns while searching for something concrete, something real.

In the last Gomez show at Ghebaly (see here), the artist simulated an outdoor park, a bucolic, natural realm, inside the gallery thereby continuing to conflate which side of which thing we are on, virtual or actual.  Environments now both built and natural are certainly more confusing than ever.

Not as large a fan of concrete imagery myself, these works straddle the line with issues about depth perception as it pertains to the spatial aspect of concrete imagery hovering around and approximating the abstract condition, again one taken up by depth with respect to time (ivy grows slowly across the visual field). This single image above of one of the paintings shows the painstaking effort to understand the near sight, what is directly in front, while also offering some sense of what is behind, an image of two females who could either be representations of the actual space or virtual additions through the process, all a re-presentation of what eyes can do really well, something cameras and other viewing devices can not possibly do well. Think rack focus in filming. So, for me, this painting displays the shortcomings of technologies that we increasingly rely upon for communication and truth, perhaps authenticity in concern, certainly relationships of all kinds.

While answers are not given and questions abound, knowing someone took the painstaking time to paint rust marks on thin cyclone fencing lines AND is asking me to notice such minute details, is worth wondering about it all on its own.  On the other hand, if I have missed something about this and how the investment of time functions currently, then I suppose things really aren't what they seem to be.  Or maybe I have seen all of this before? 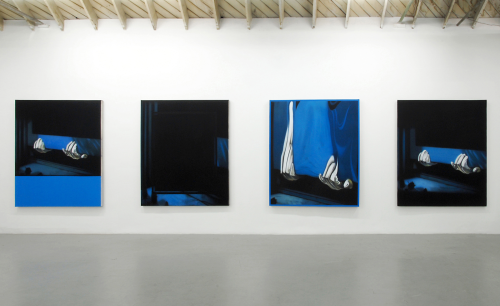