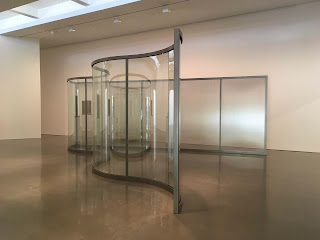 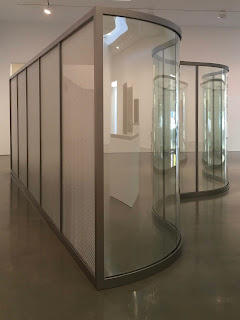 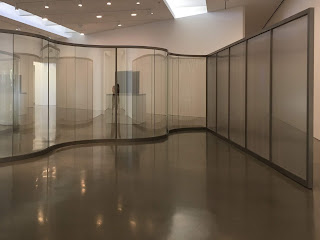 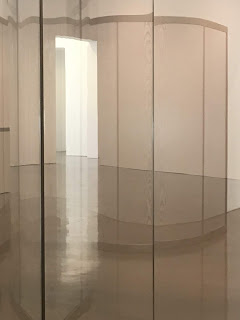 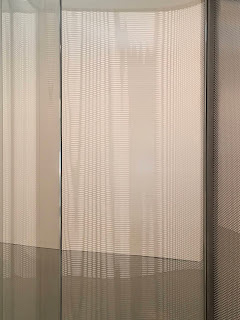 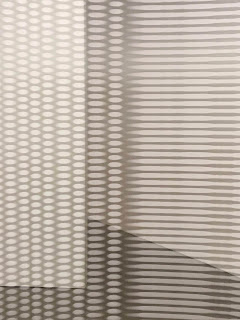 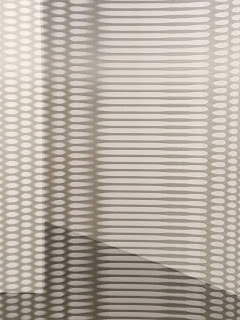 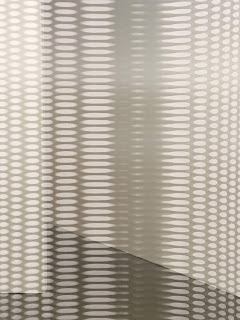 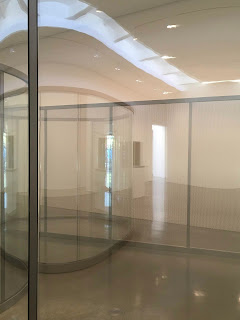 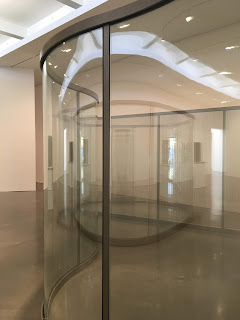 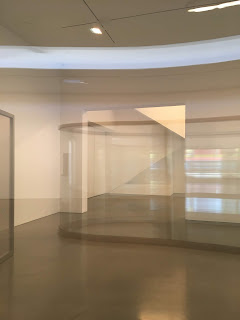 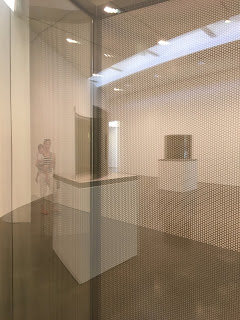 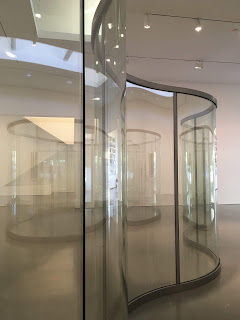 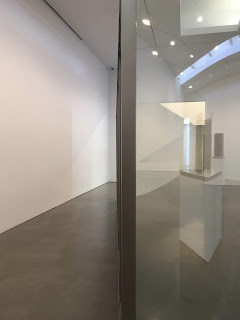 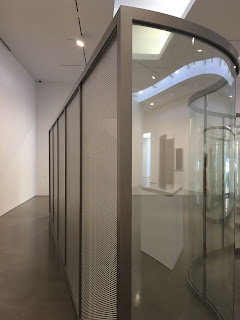 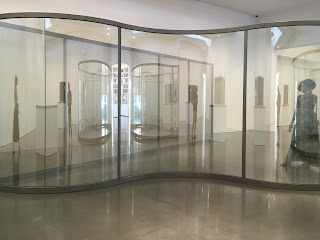 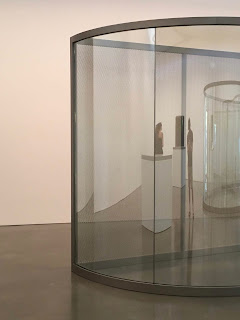 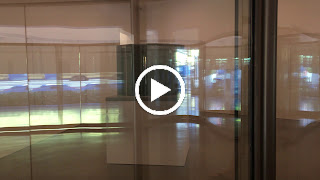 How to look beyond the self by looking at or through the self? Somehow this seems to be an essential component of these works and works like these by Dan Graham. It's a pre-selfie mind in a post-selfie world. Viewing this work took me back to Graham's exhibition at MOCA in 2009.  Many of the works then were tinted so it was difficult to see in from outside. In fact, in one such example, I was circumambulating along the outside perimeter when I came upon the opening where someone was about to exit. If such an awkward moment were not enough in and of itself, it just so happened to be Kim Gordon, the lead singer and bassist of Sonic Youth. We exchanged awkward postures and traded places in silence.  Just prior, she was able to see out from in, while I was not able to see through from outside.  This uneven exchange, innocuous enough on its own terms, was cause for unexpected humor, at least that's it felt for me. More important than personal anecdote was the kind of situation that these glass pavilions set up between outside and inside, to understand which is which, and to perceive when and where images, virtual images, and visual obstructions may or may not arise. Unfortunately, I couldn't find an image of this particular one.

Moving backward in time to the fall of 1998 at Dia Chelsea in New York City, I viewed the Dan Graham, glass pavilion that sits atop the building.  Less struck by any visual, I was taken by how much it modulated sound.  It was if I had gone deaf. The din of the city was silenced yet I could see through the transparent glass. Because it was closer to evening, there were no virtual reflections to contend with. The image I share below is one take from Dia's website. Somewhere in my things, I have postcard with a very different point of view. 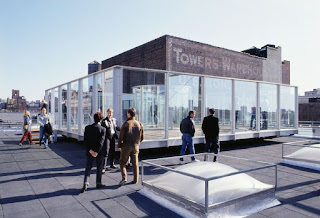 Moving yet further back in time, it was the summer of 1996 that I viewed one of Dan Graham's glass pavilions. This time it was in San Francisco at SFMOMA.  It's site was pre-reconsturction of the museum at large from just a few years ago.  Somewhere in my collection, I have photographs that I took of this one.  Set onto a small balcony at the front of the museum, it was less open to exchange; it was a compressed space overshadowed by the brick walls of the museum itself, or at least that's how I remember it being. Rather than thinking about the external world of it's environment, however, I recall thinking more about the space between where I was standing inside and other viewers moving around the outside.  This relationship between inside and outside and between participants seems an essential through-line to all of my viewings and so I have to wonder and/or believe that Dan Graham intended such an investigation, relations between people more so than object and environment though, obviously, this could be also. Regardless, it is the interface of glass that sets up such possibilities. 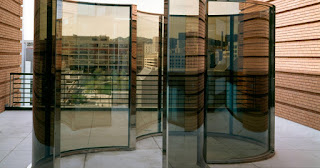 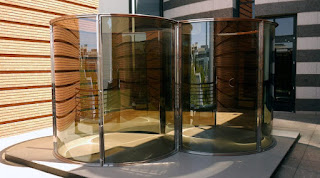 Because of these pavilions, especially the curved ones, there seems to be a strong totential for total internal reflection by virtue of the materials options. But because they are open, often at one opening and always above, they really do seem to be about how we move in and around these works viewing them like a painting, where are ourselves are the action.  So many questions begin to arise from such a viewing experience.   How do we separate things? Within individual works? Between works? Within ourselves? The environs at large? Rather, that provide definitive answers, it seems more valuable to allow the line of questioning to support the viewing and reflection of the work as movement and perspective distort and multiply in that fun house kind of way.  Time and space become elastic in these viewing whereas either the work or the viewing of the work is both continuous and not at all.