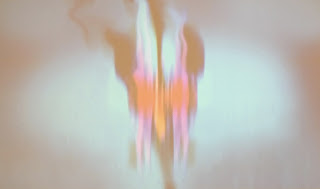 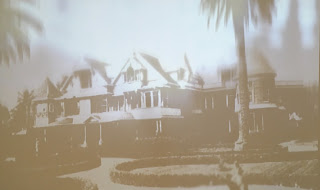 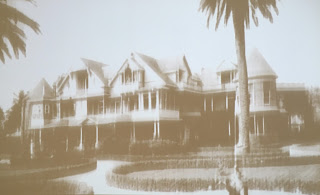 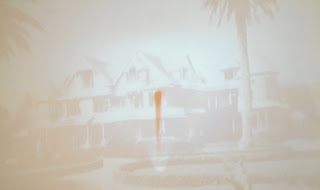 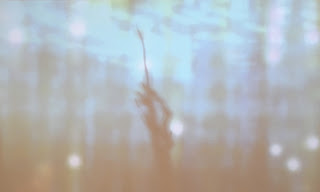 Brian Eno video as painting...
Such fine lines between sanity (or rather its concrete illlusion) and other kinds of head spaces, alternate realities that run concurrently and unpredictably. Such is the experience of sensitive being within Sarah Winchester and her mansion and the artist attracted to similar things.

Having once found inspiration within the confines of the Winchester Mystery House myself, I thought very little about the gun that built this house nor the associated empire. I don't think Blake thought about the gun much either, given the scope of his work and this work in this show in particular, one about armaments and such. On the other hand, the more ethereal aspects of being, per usual, are in full effect with a work like this one, a film that moves in and out of focus, such a blank stare.

As much as Blake, I also believe Sarah Winchester herself was more interested in less tangible aspects of being. For example, she went to great lengths to acoustically tune a room for ideal music listening conditions. Sounds lovely and proves a high sensitivity to such conditions within a living space, an elaborate home of chambers to accommodate practical needs actually. Winchester was said to be running from ghosts, but I believe she was fighting against men who could not believe in her brilliance.  Such complicated relations and it's difficult not to think about Blake's as well, his suicide as a response to his girlfriends suicide, neither incidentally at the hand of the gun, but rather a convicted mind concerned with alternate realities and suspicions, ghostly only if you want them to be.

The subsconcious is a curious place, one that has been brought to significance on a more scientific level during Winchester's life time, certainly during the time of the construction of her West Coast home in Silicon Valley, a place bereft with its own floating images, somewhere between Muybridge/Stanford and then digital technologies of all kinds.  The micro, digital world has certainly made good use of a moving image or at least propelled it.

Such ideas are certainly worth taking up in art just as two gossamer and floating representations of American flags hang still. 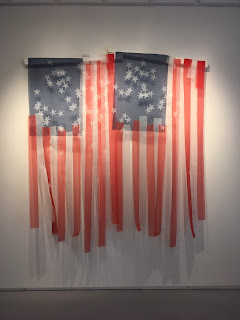 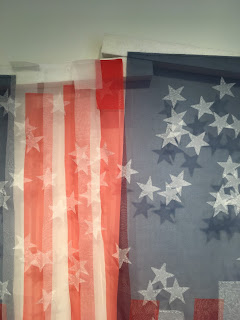