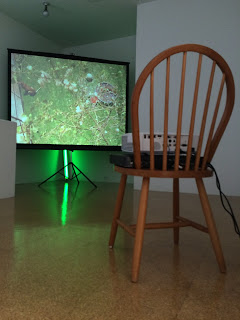 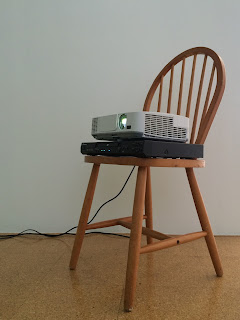 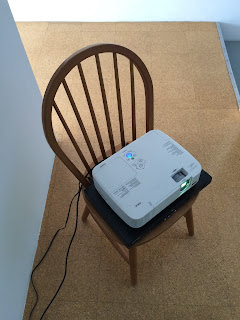 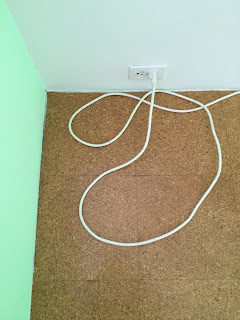 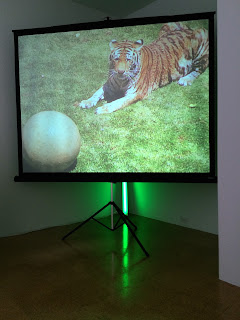 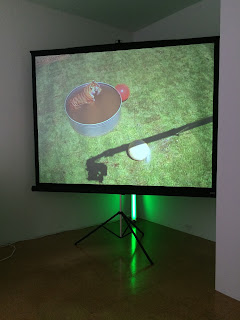 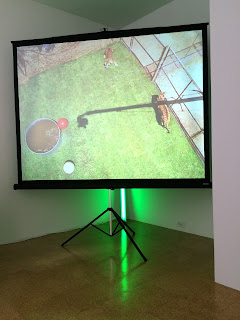 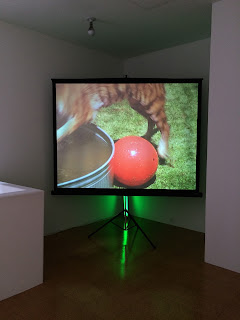 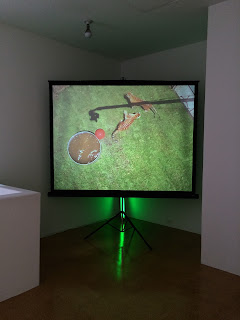 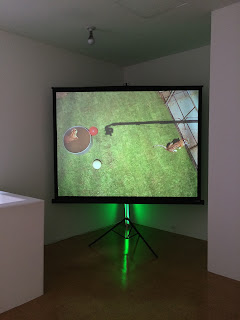 When I was growing-up at home, we used to go to the circus every year. There were always lions and tigers.  The tamer (like a magician with a hat and wand) had two props, a chair and a whip. These were the two devices by which the tamer orchestrated (controlled) the animals.  Here in this video installation by Diana Thater titled Perfect Devotion Number 5, we have more than two devices according to the checklist information (see under the first photo above), but really just two, the projection devices (chair, dvd player, and video projector) and the reflection devices (the film screen and the light behind it, which is curiously absent from the checklist).  About the quiet green light, lurking in the corner behind the projection screen, it’s phenomenal and structural presence seems too important to be absent from the checklist.  For, the light and therefore color overwhelms the viewing space physically and communicates with, possibly, what we call green-screen in film/video-making (and all its associations of artificial effects) not to mention the green grass in the video itself.  With such a constellation of elements and terms, it’s difficult for me not to think of ancient fireside ritual, the space of painting, performance, theater and cinema.  Though as the title, the elements, and the checklist suggest, it is more solitary and introspective than all that.

With the stage set, our attention turns to the subject of the projection, the interaction and play of caged tigers.  The mise en scene has an air of domesticity with the “kiddie” (kitty?) pool and plastic balls; a domestic space is reinforced by the dining chair that props the projection, itself caged.  I like how the chair sets up a kind interior space metaphorically as well as a more general screen for the work as a whole. This particular iteration of work seems to suggest this more so than the last time it was installed at the same gallery in 2008 but in an alternate location, one more open and less connected to the outside world.  This cove and adjacent window (not pictured) offers a nicer framework for what I see as important to the work.  So returning to the current iteration, the projection watches itself, while we, as semi-included viewer watch from whatever position we would like, including ones that would obstruct the projection, perhaps intentionally vital at moments.  One thing is clear, we are not invited to share equal space with the projection by virtue of an identical chair. However, the floor is an option, in which case we would be sitting at the feet of said projection set-up.  This work is about moving around, restlessly like a tiger.  So, with several sutures between the apparatuses and the art installation, the floor would be the ground on which the tigers walk as well, in which case the viewer and the tiger are oddly reflected as playful wanderers.  The viewer and the tiger are paired in a kind of play between a scene in real space of the art installation and the virtual one of a backyard pool.

With integrated relationships between space, apparatus, and beast (two and four-legged) accounted for, one is invited to draw variable conclusions as there seems to be no starting and ending point to the play.  Depending on which time you enter the viewing space (and there is no duration given for the video portion. So, presumably one second is as good as who knows how long), backyard, domestic suggestions give way to more conventional and common tiger sightings, cages in a zoo as revealed by the kind of fence, itself another kind of screen.  It’s certainly not a natural setting but somewhere in between, somewhere between a proposal of nature and the artifice that humans construct to propose mastery over the natural world, to come to terms with restless beasts within and without.  They are fascinating and attractive, yet unpredictable.  Here, I am now comparing animal behavior to less controlled and understood impulses and activities within human being.  Then, as I start to think about the shadow of the camera crane that appears looming in the projected frame like the wand or whip of the magician or tiger tamer, I think about a question of who or what is the creator, the orchestrator/controller of this scene and my part in it. Consequently, with such scene in mind, I have moved outward/inward from the world of this art installation and its secondary projected world of the tigers to the world (and universe at large) to consider tougher questions of being, the relationship of parts, and complications between interior and exterior conditions. I can now think about gallery space and domestic space and video space and a space-time continuum as a cage, a semi-permeable structure by which the ins and outs at which place and time determine everything.  Certainly, this meant something different to me as a five-year old at the circus than it does me now where and when the literal concept of circus as “ring” and metaphor of circus as “traveling show” persists in elusive exchanges.  For me, at some universal level, this work is about that.  So in this work, artist is tamer; both devices (projector and screen) control the play; and the subject and the viewer/viewing subject are complicated/complicit in an endless trapeze. And it goes around, and around, and around...
Posted by Justin Lowman