In some respects it seems silly to post images of photographs. Something about it just seems odd.  I'm not sure if it's because the work already occupies a similar space as the documentation (photo a photo), or if it's because works of this scale and magnitude are difficult to qualify, or if it's more mundane in the way that reflective glazing of the works and the general lighting condition of their reception both seem to negate any kind of decent reproduction here or anywhere else for that matter.  In the latter, the immediate viewing condition suffers by the lighting and glass condition. So, for me, this last concern seems the most relevant to discuses since photography in its essence is about the record of light as it pertains to a specific space.  What results are images composed with particular subjects in mind.

Here, in the works of Thomas Demand, the subject seems to be frailty and its relationship to time.  Whether it's the momentary bloom of the cherry tree or it's fallen paper cut-outs (leaves of paper, left) or both as signals of fleeting moments, moments that a camera and its operator often strive to capture but never quite attain, the focus can easily be thought about as a moment itself. 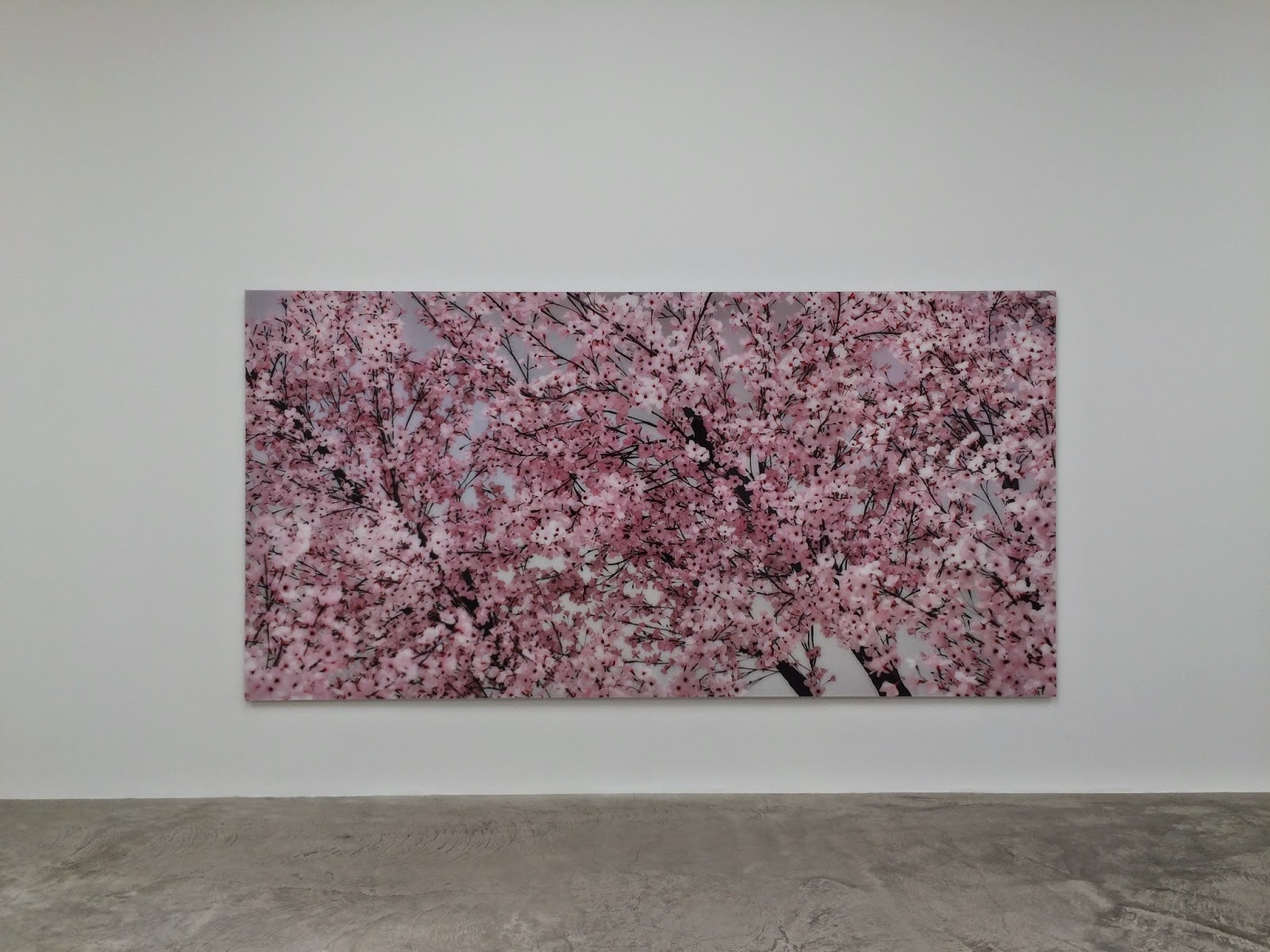 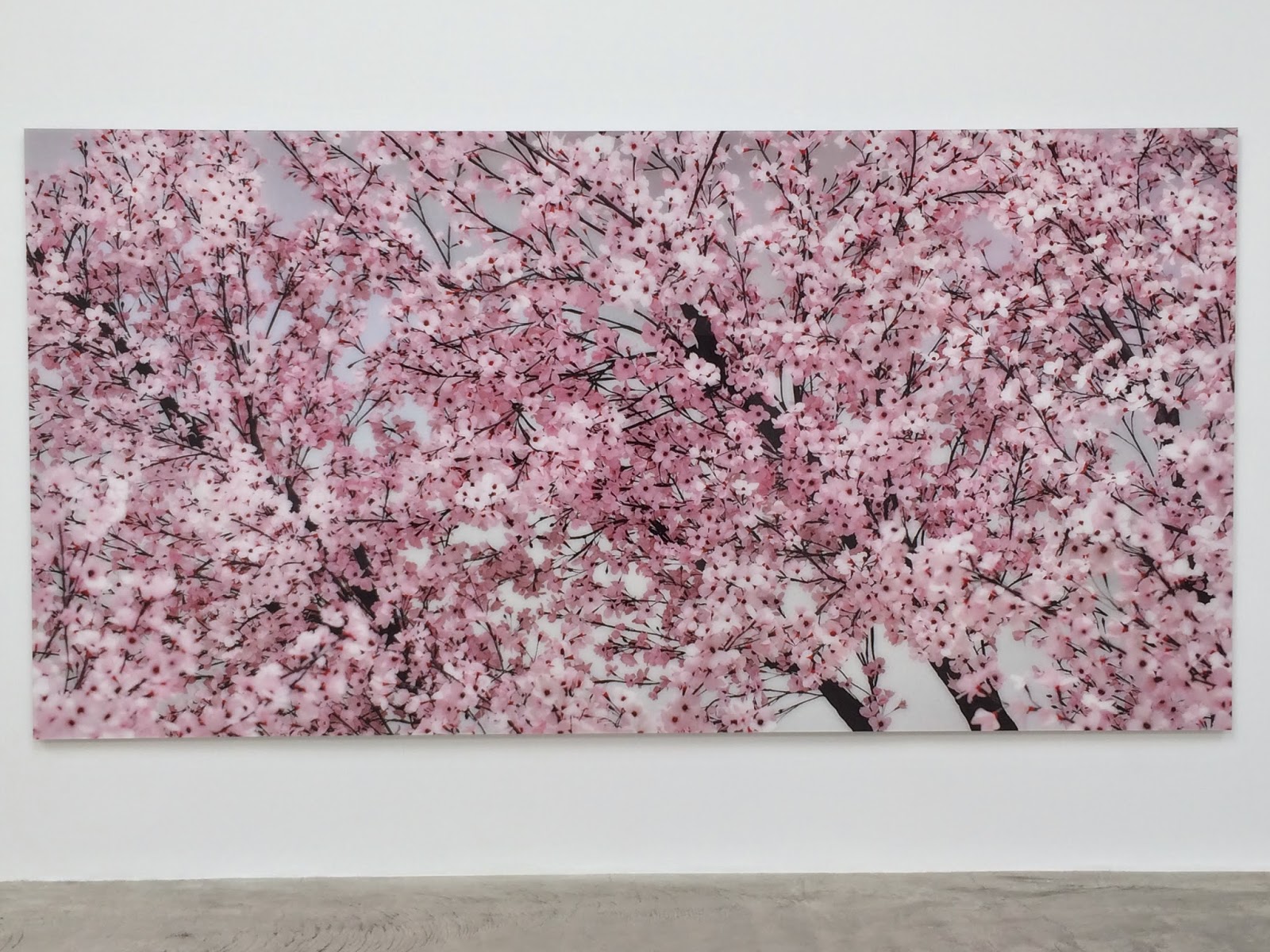 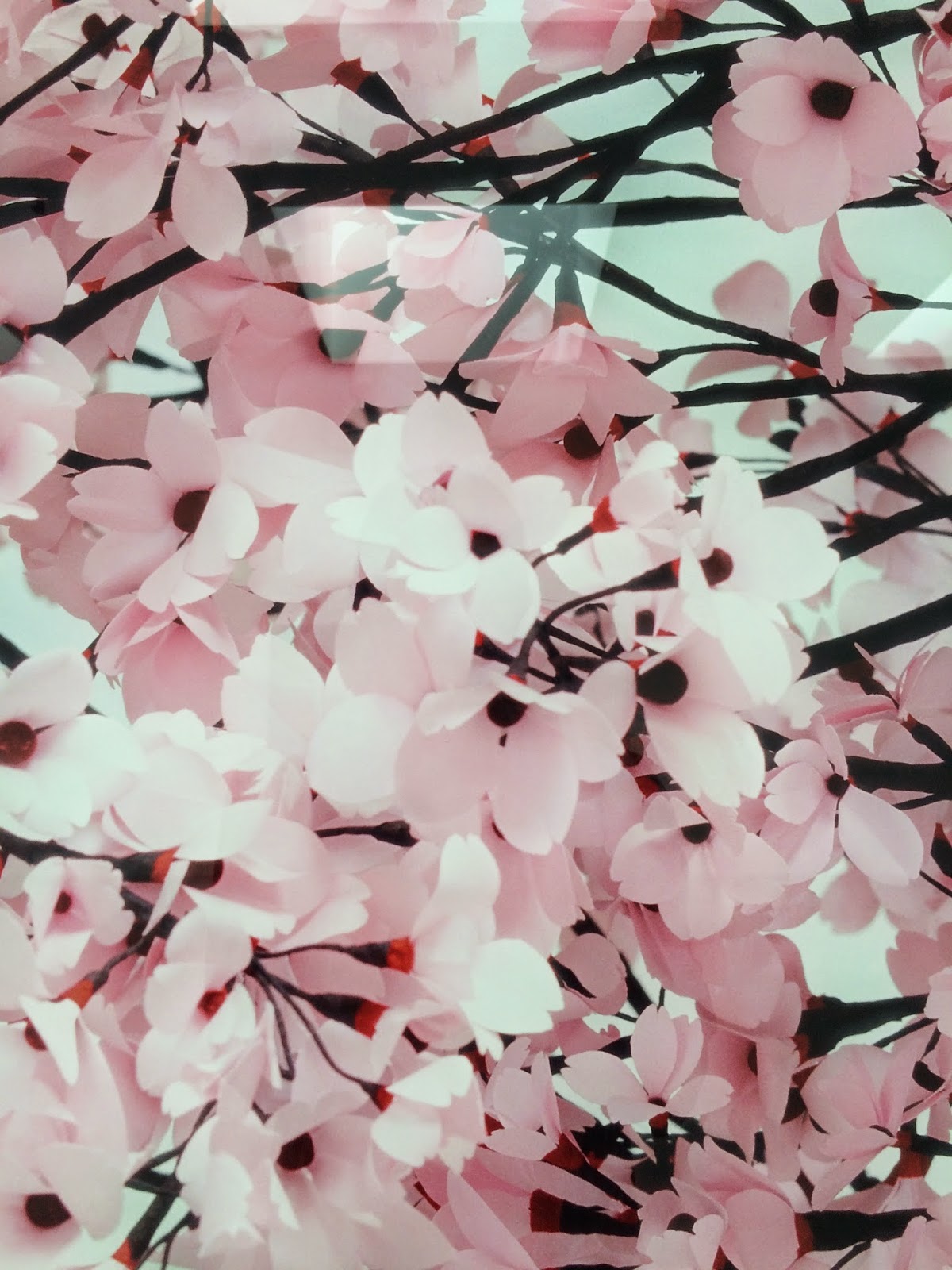 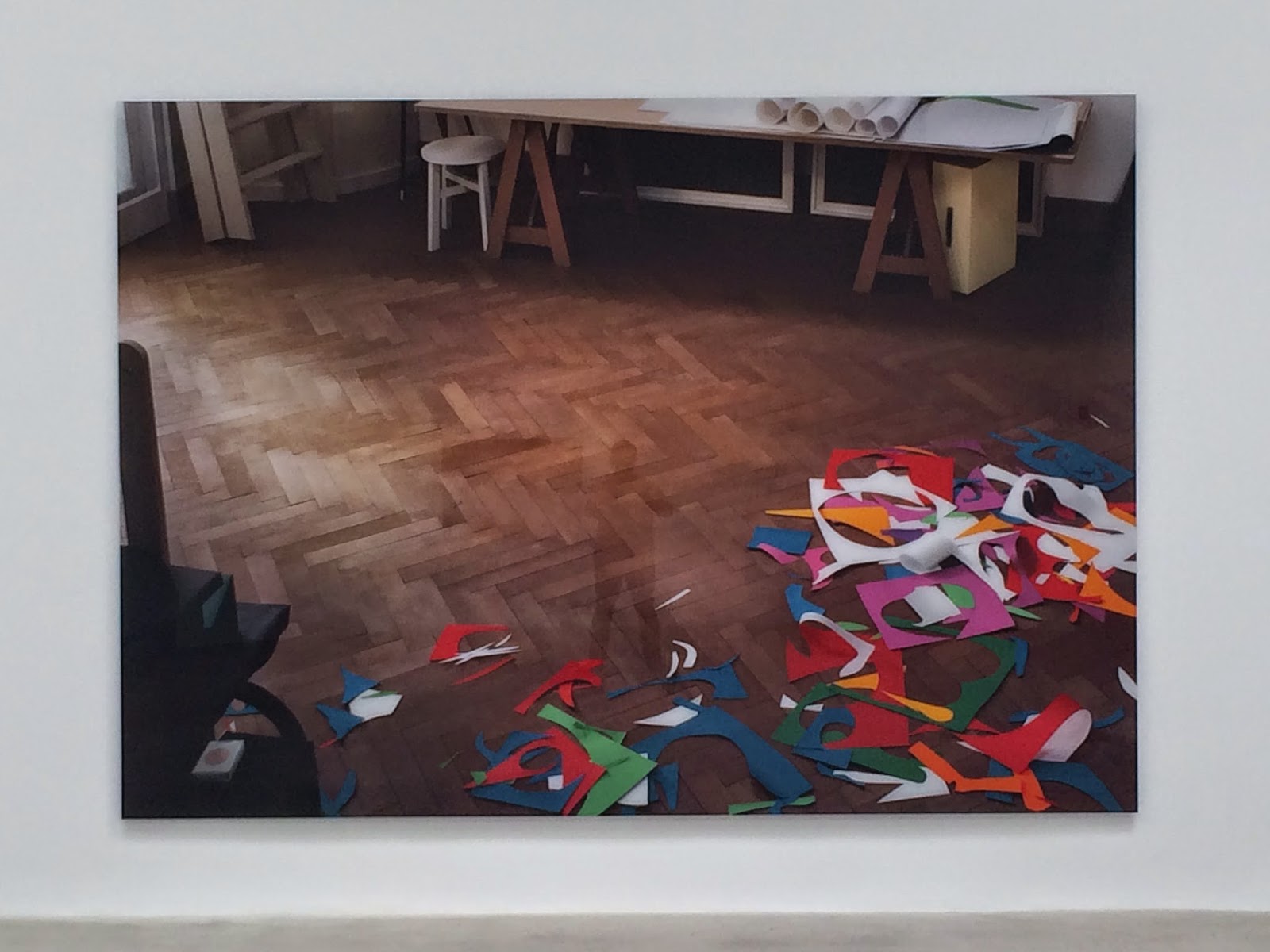 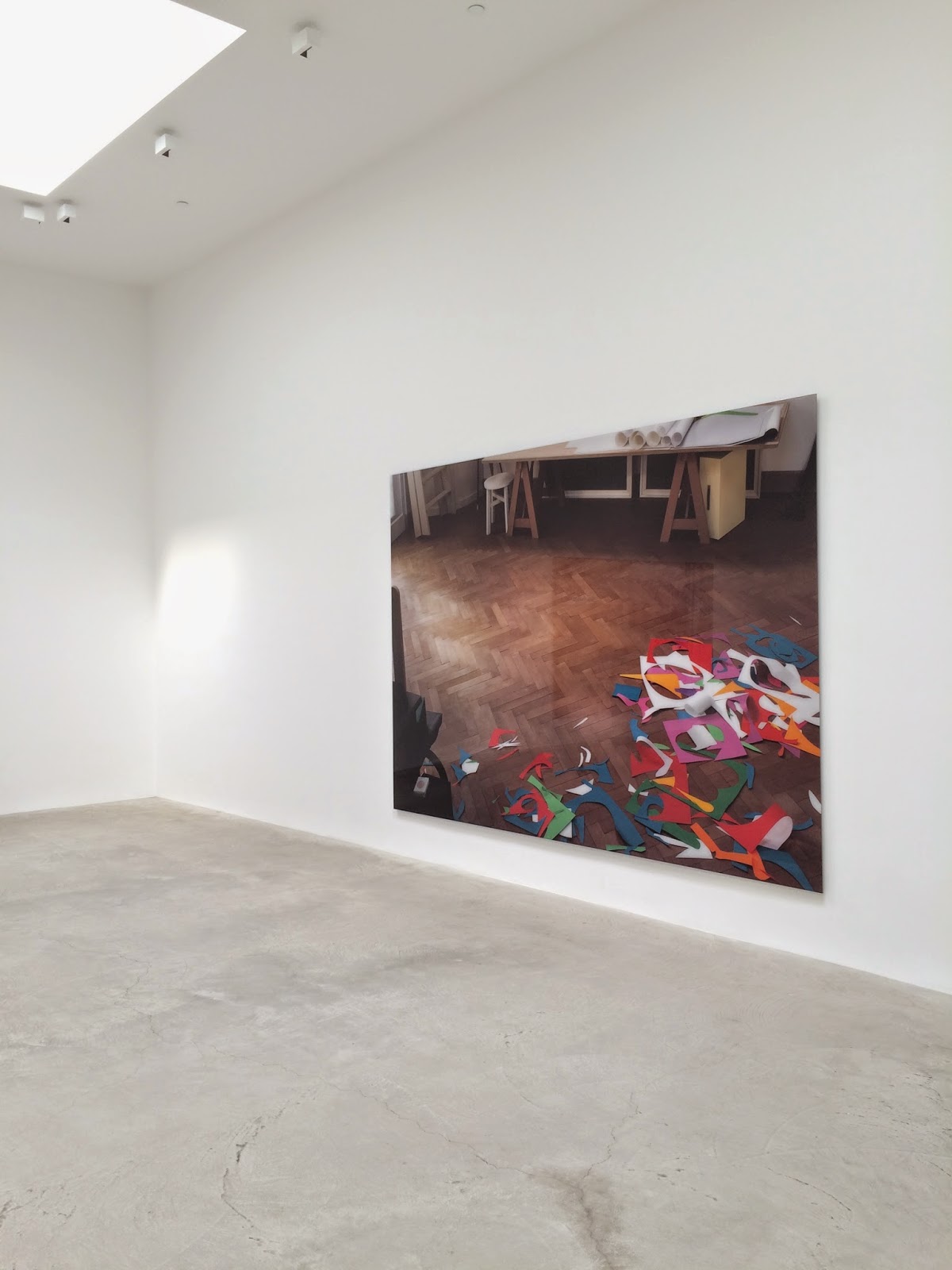 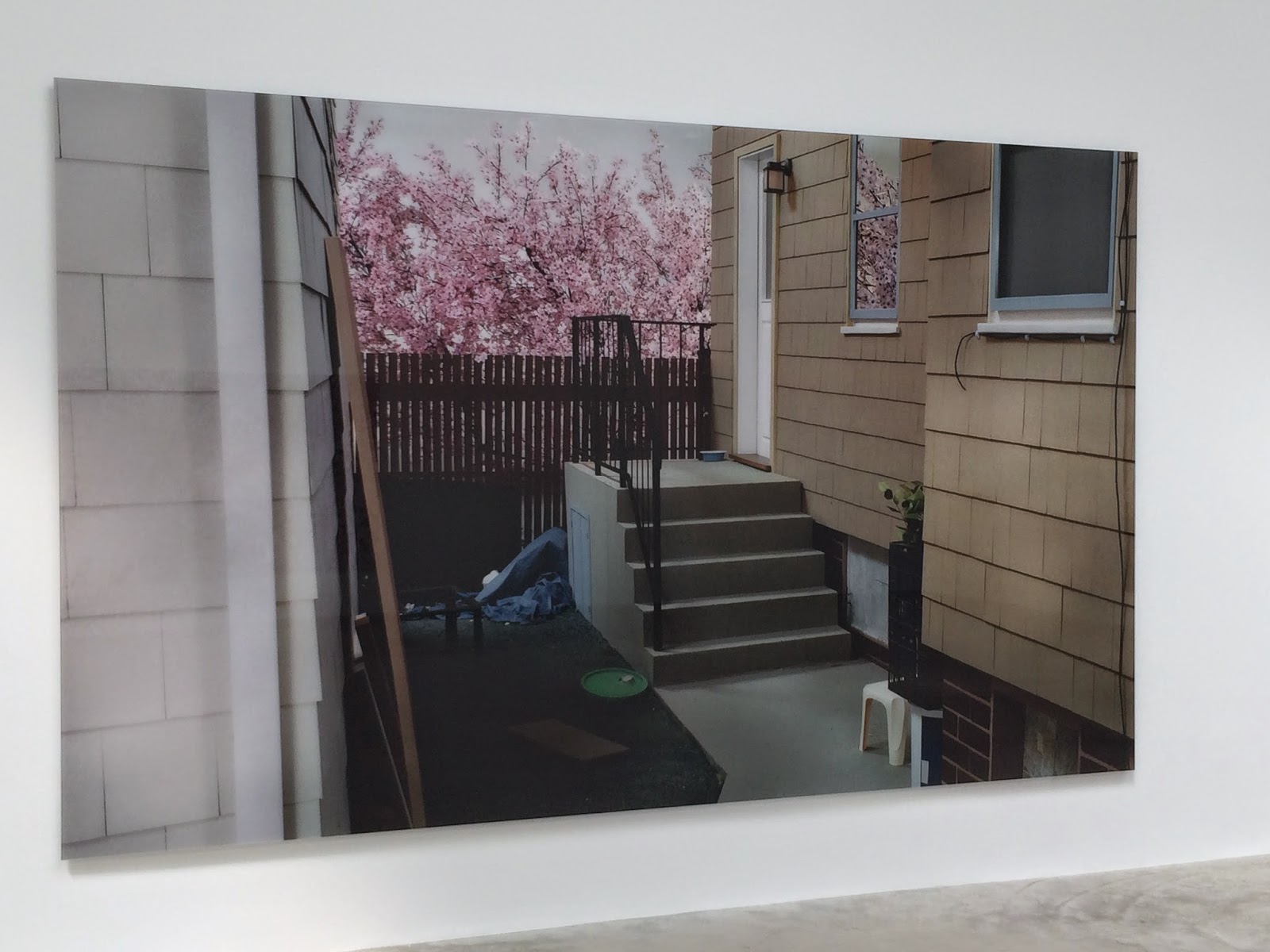 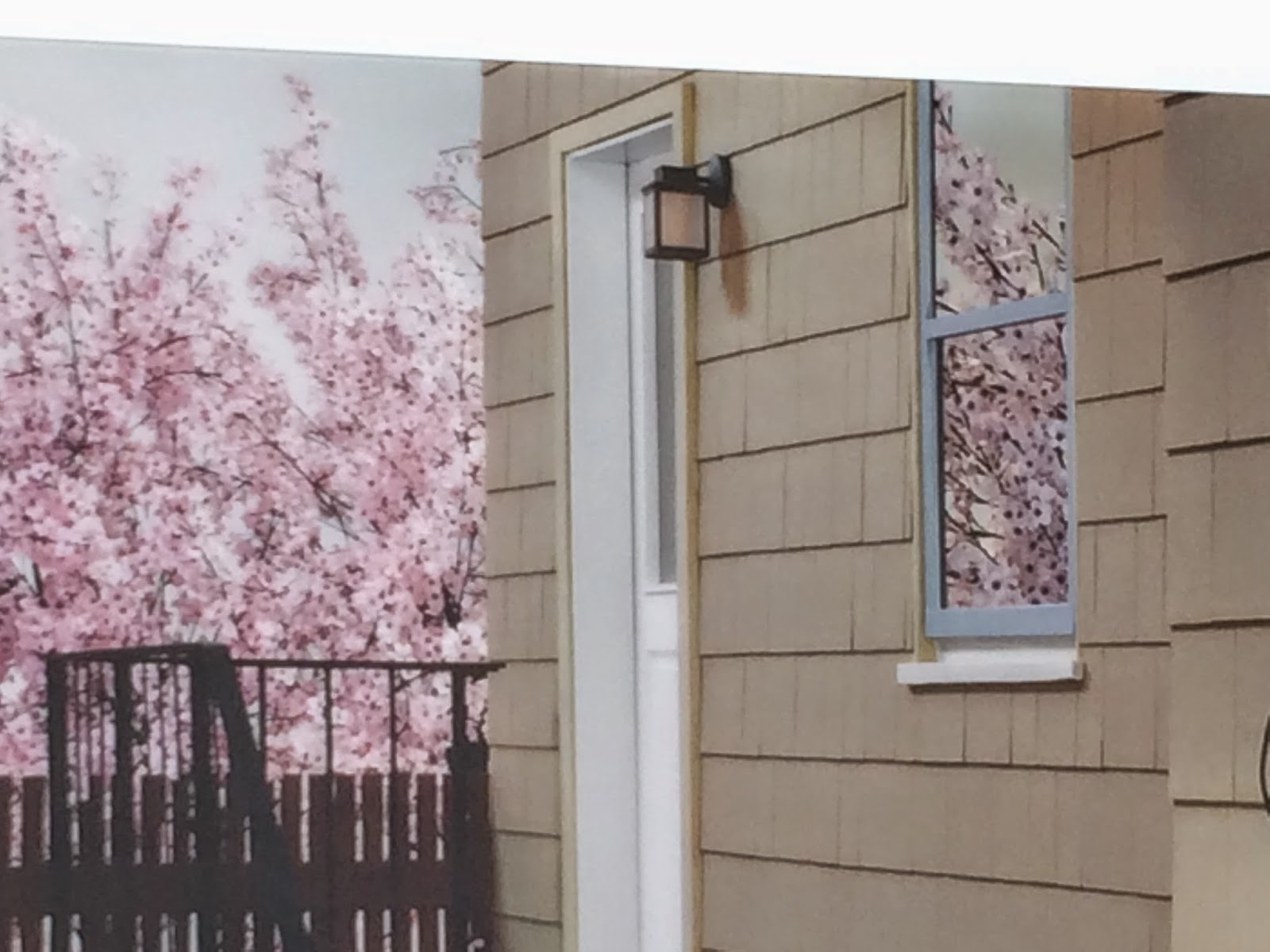 If it's not enough to think about the viewing challenges of individuals works, the particular installation strategy of these grouping of photographs also complicate a notion of the space and the "viewing time" as a consequence of repeated content and how each photograph is actually related to the other by where they are physically hanging in relationship to one another in the gallery itself.  If you look closely at my snapshots, you can see that oblique points of view minimize certain reflections while building others into them.  For example, not only does the angular, patterned wooden floor solicit such a viewing angle but it also appears in a separate photograph as ground (the one with the Matisse-inspired cut-outs).  Looking at my point of view, not only do you also take in the gallery space (skylight and floor) but also the reflection of Bloom from the adjacent wall.  Then, looking back the other direction, we see Bloom reflected within the photograph itself of another, yet another is also bound by certain architectural constraints, this time an apparently domestic space.  So, by considering the constellation of photos and their subjects one is able to consider the complicated viewing space as both separate and within, in which case the viewing subject (myself in this instance) is both passive and active, simultaneously outside and inside. 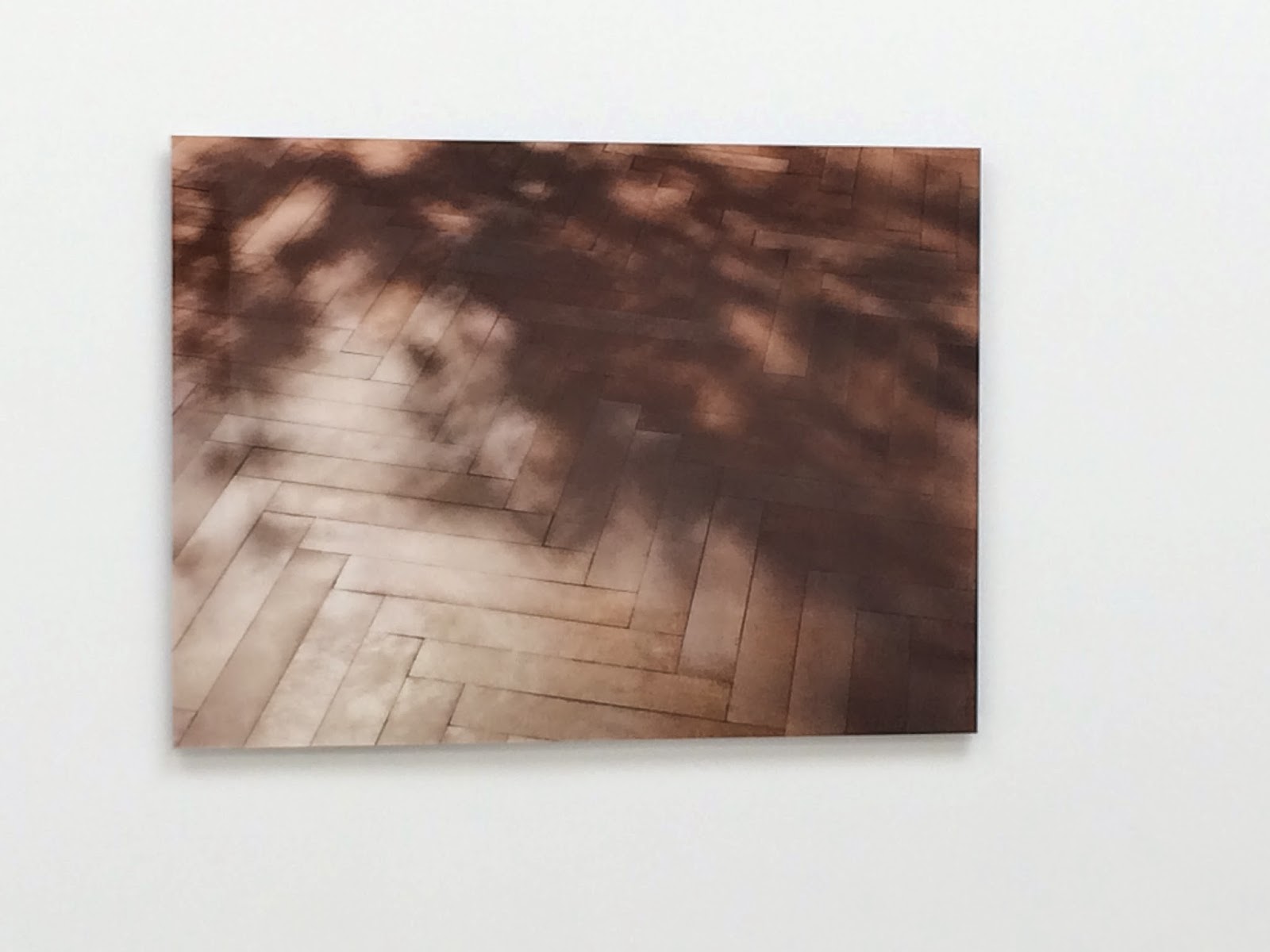 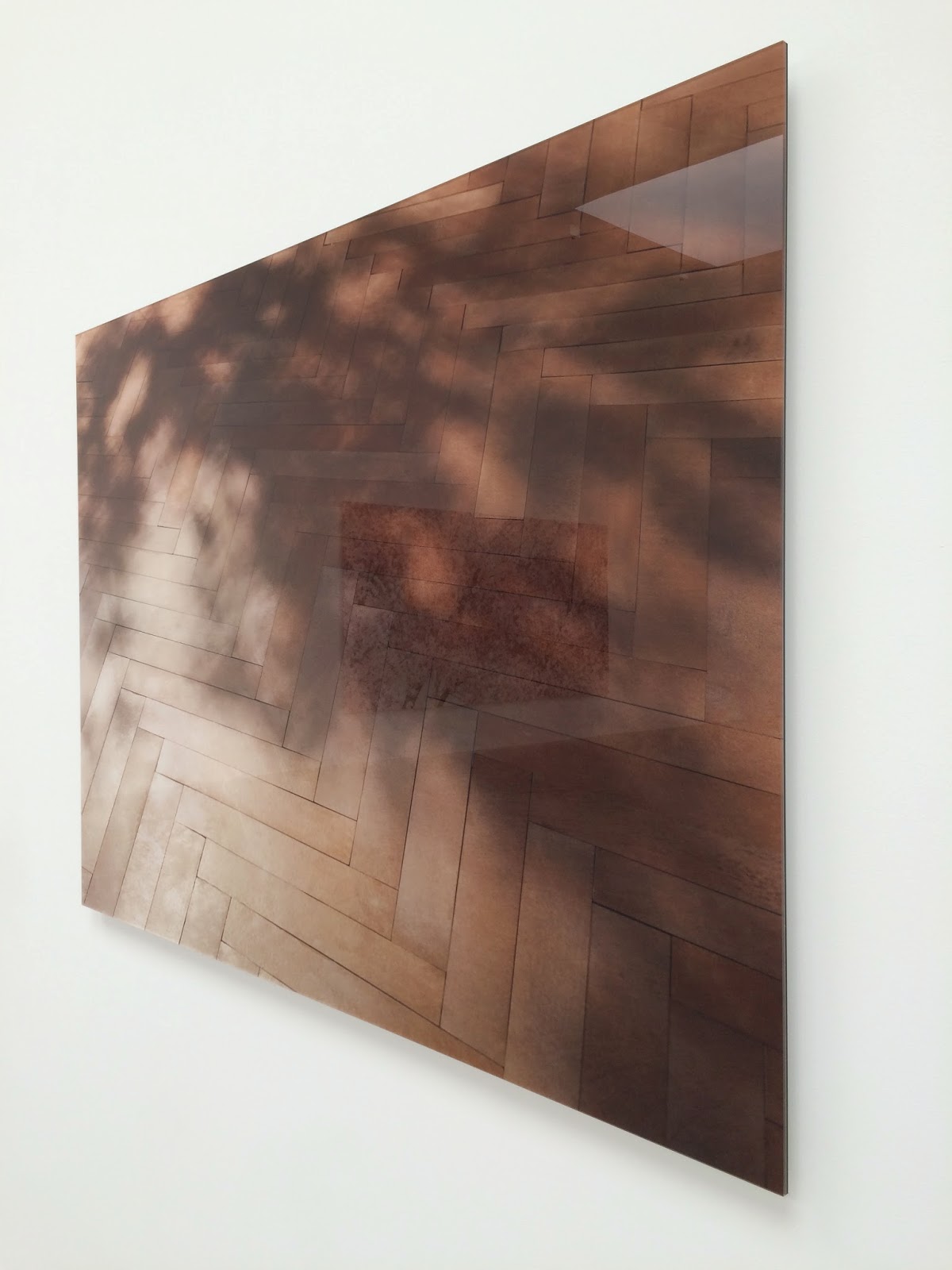 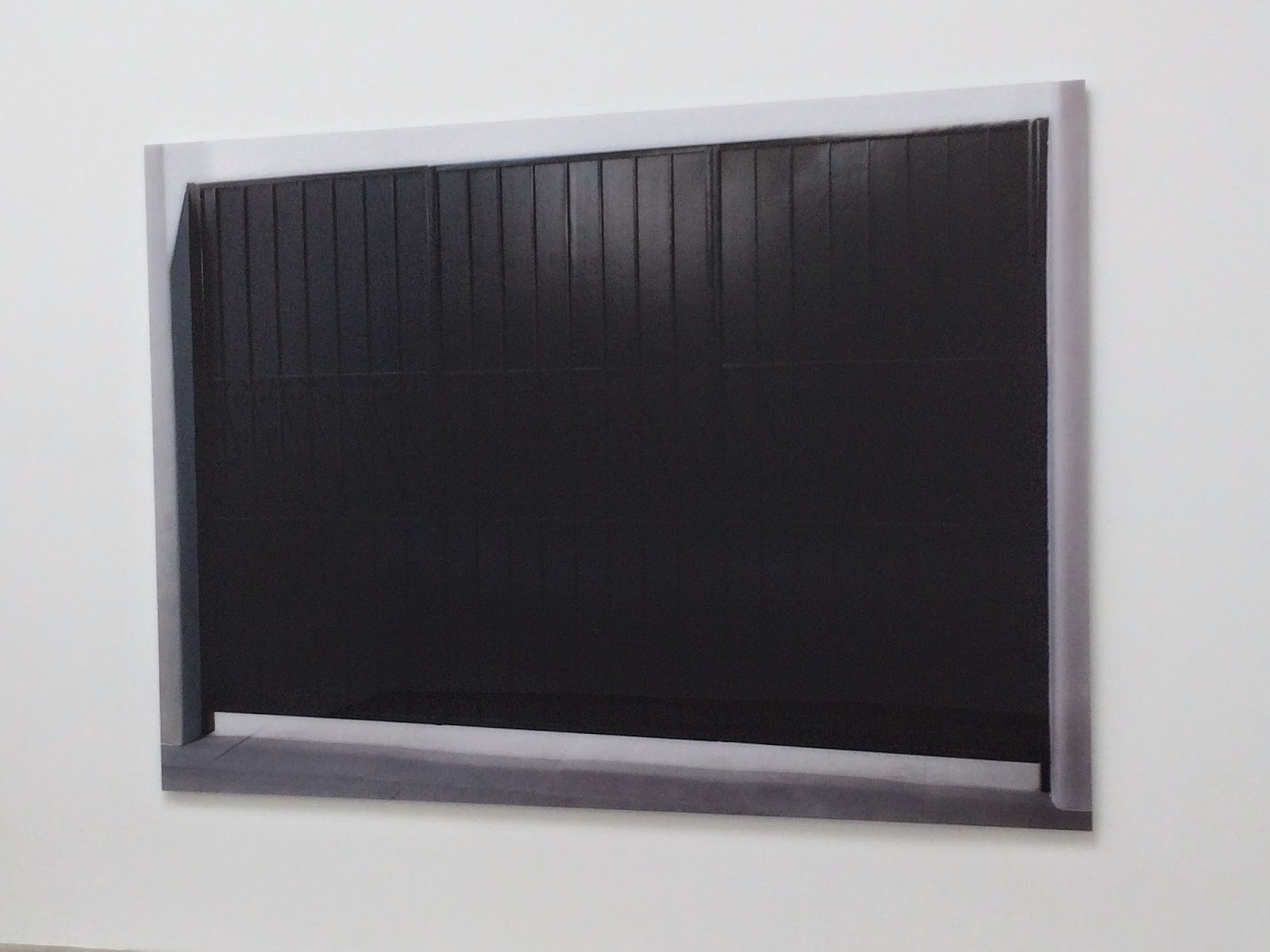 If you take the example of Sidegate, you can note not only the difficulty of the viewing space as it pertains to reflective surfaces but also of the lighting condition more generally especially as it affects digitally-produced images.  Contrast and brightness are too very difficult effects that photographers must struggle especially within current technologies.  Again, viewing angles (points of view) determine different outcomes as one struggles to discern differentiation within a fairly monochrome photograph.  The idea of struggling to peer through, at or against a gate seems obvious enough as both a thought about transparency as well as the actual shutter of a camera itself.  Then, of course, one is right at the rabbit hole of the origin of the word camera, itself which means "room." cf. chambre or even chamber. So, the point here is that such a seemingly spare and innocuous image of an everyday feature of our built landscape becomes both a sign and a representation of exploring the complexities of taking and presenting photographs. 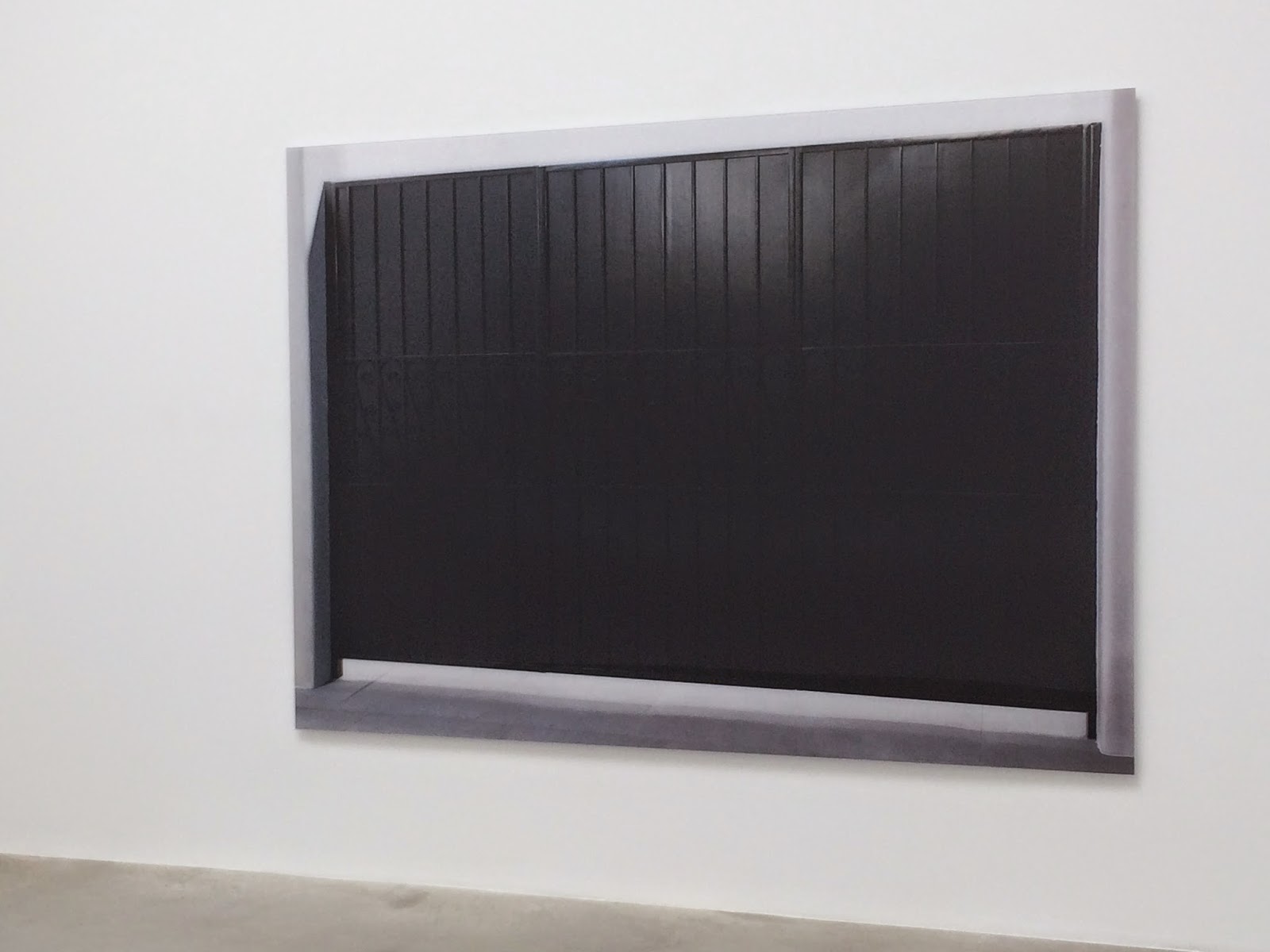 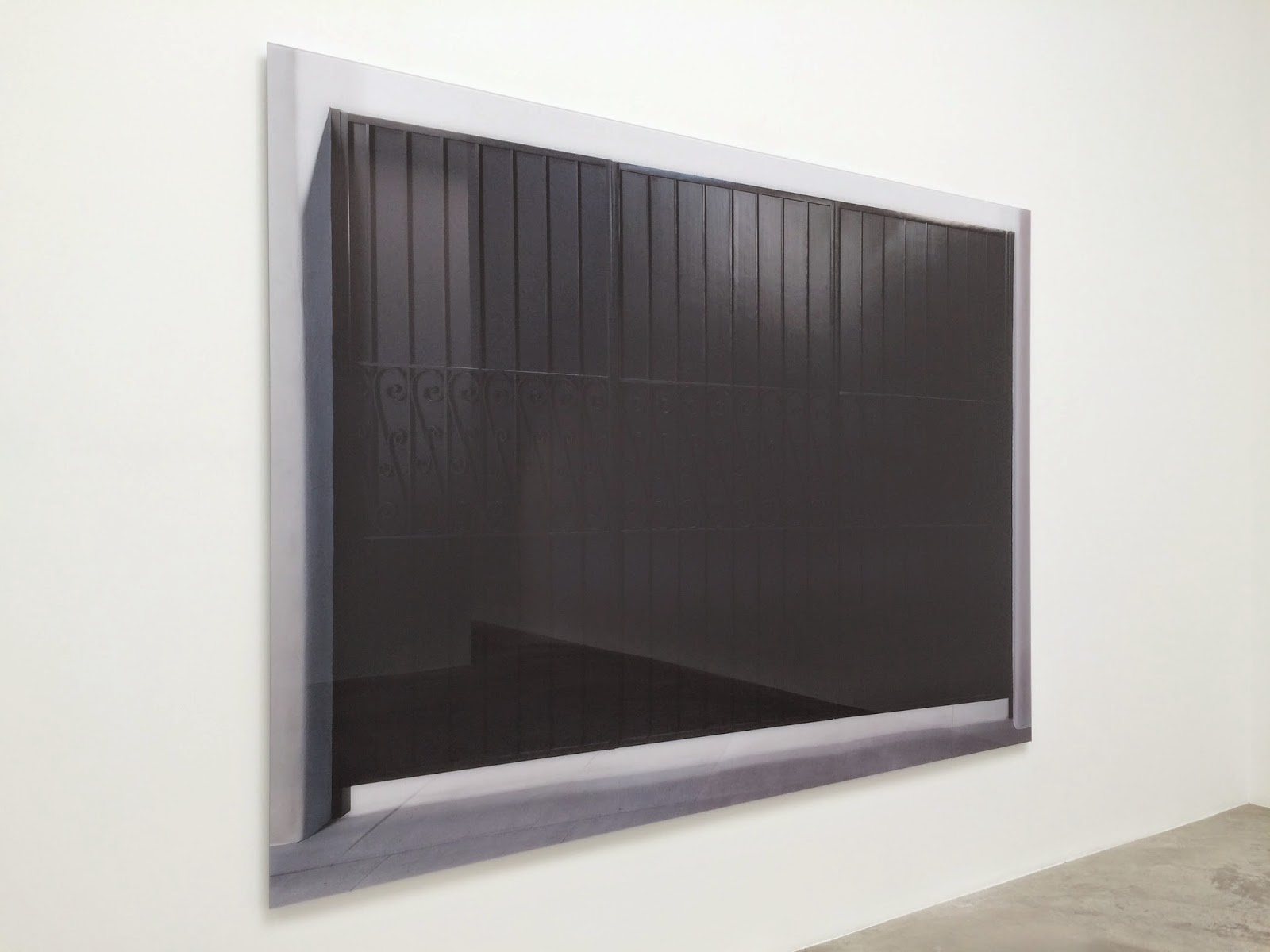 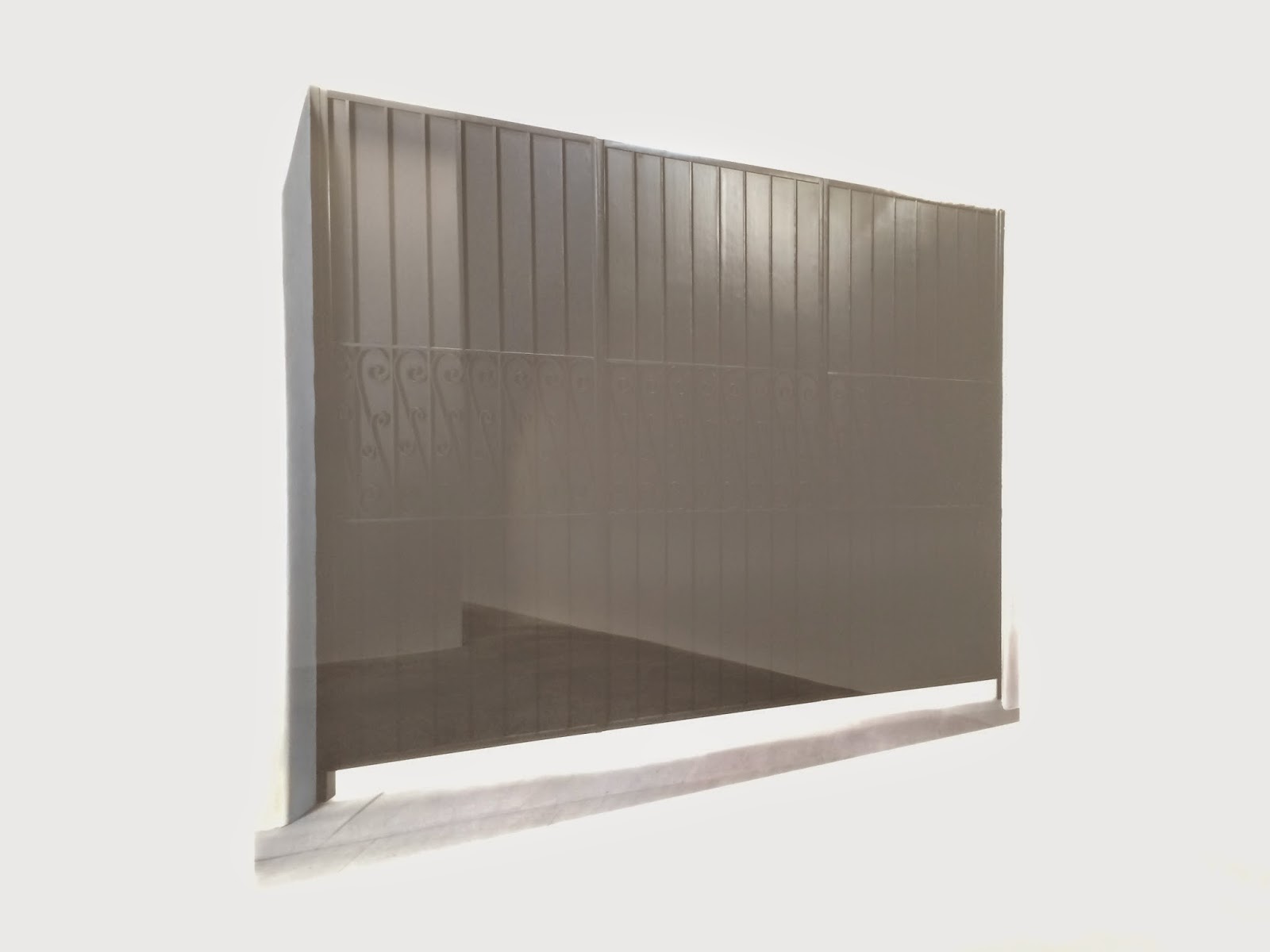 As one circles back through the show and considers the work as a whole in both spaces (note further samples from the secondary gallery below), one can see attempts on the part of Demand, again, to seek the momentary frailty of space-time conditions at the intersection of both natural, pseudo-natural, and constructed conditions.  While photography, indeed, has its shortcomings here, it does create opportunities to contemplate such connections. 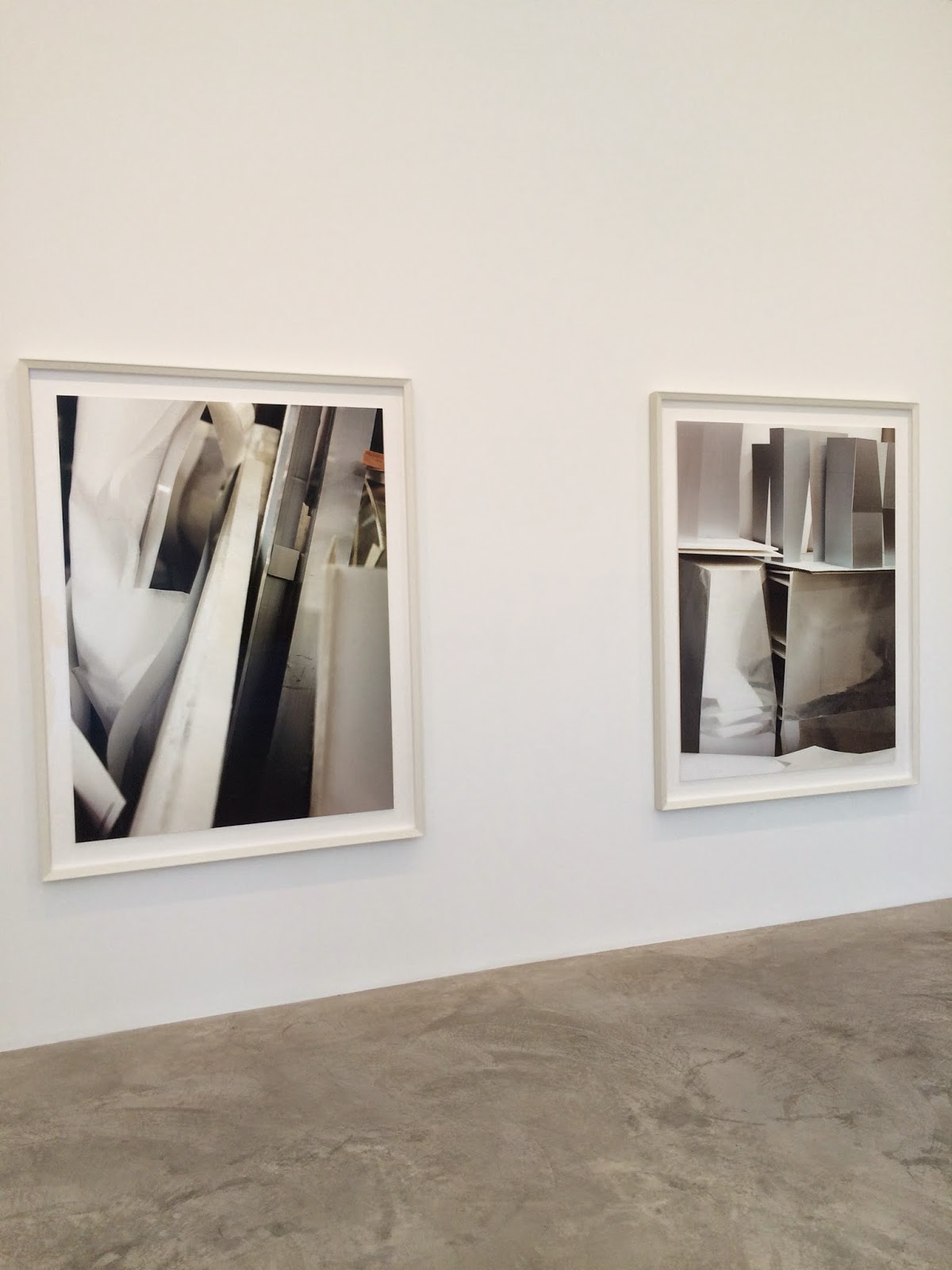 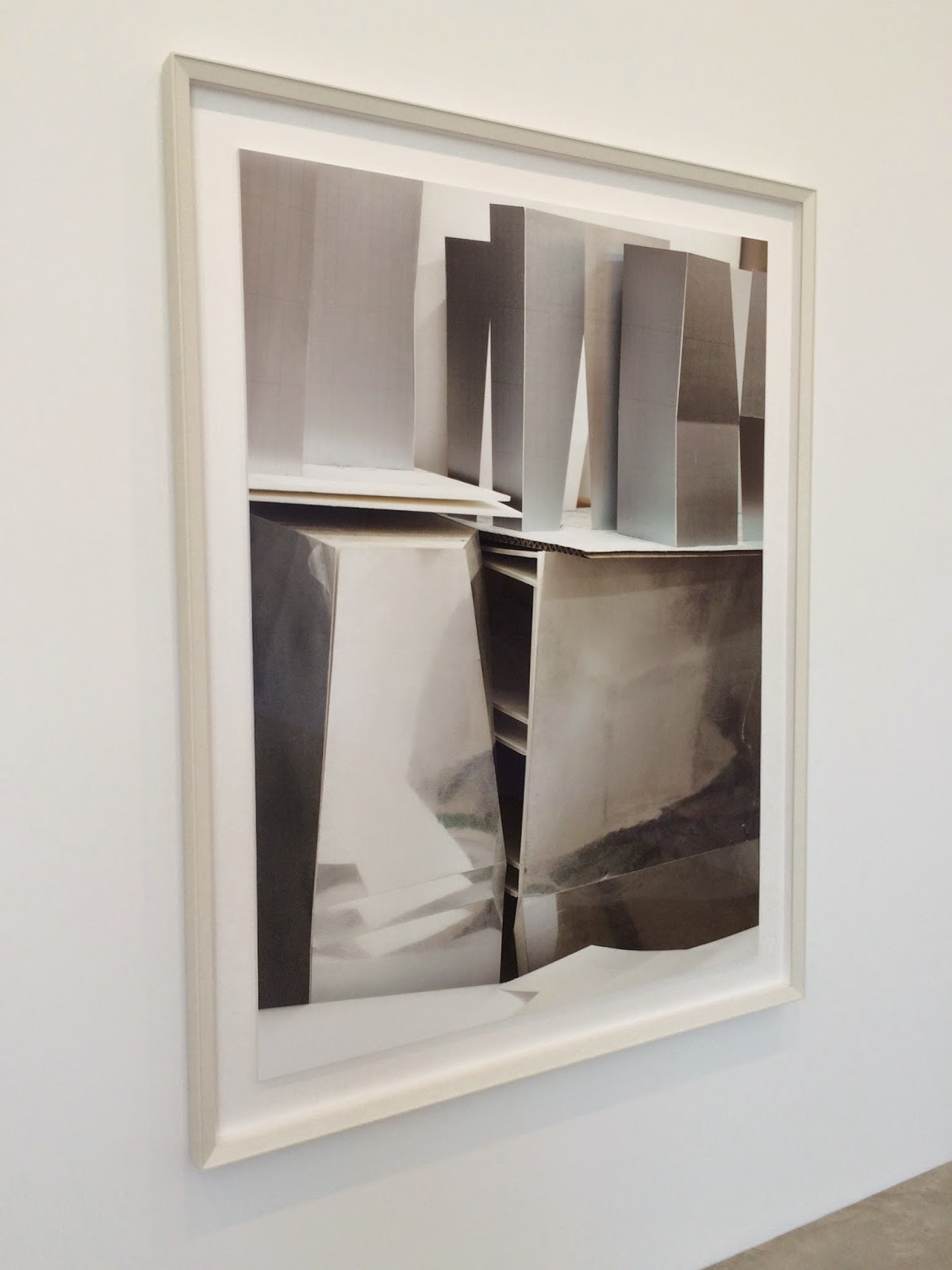 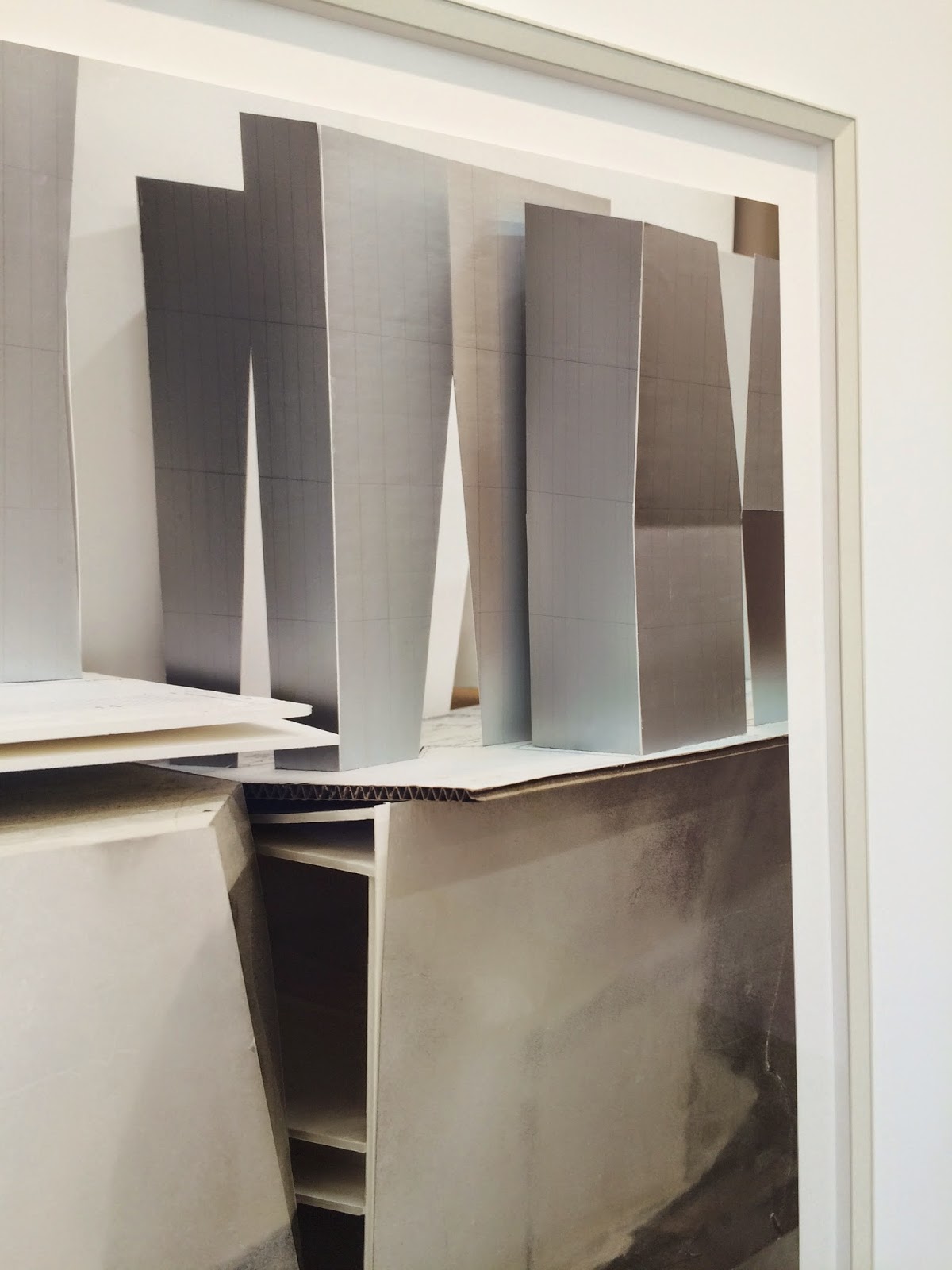 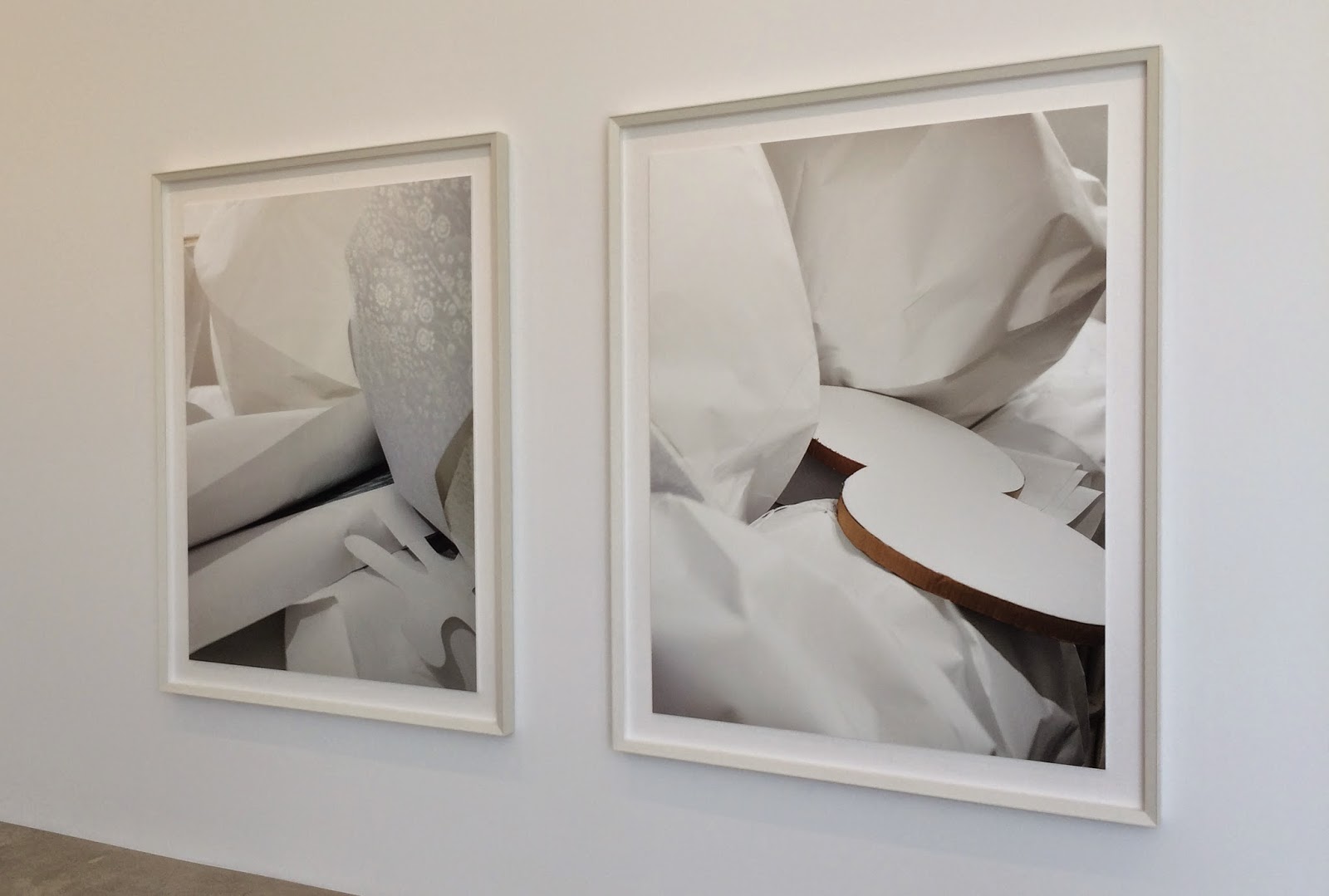 From the press release and checklist, I get a slightly different backdrop than the one I consider above.  Provided background information is the part in these works where abstract notions of time condense into historical facts whether they be of  contemporary flavor in relation to current media-driven events (the backyard of the Boston Marathon bomber) or whether they be later more rarefied ones such as the reenactment of one of the 20th centuries most celebrated painters in Matisse's atelier, the more relevant context for me is how the photographs emphasize frailty, fragmentation, and the details  (or not) of reproduction, factual elements (or not) of time and place.

While I find the anecdotal parts of these photographs fascinating and even, potentially compelling, I find that many of the works on their own to be strong and worth considering as individual specimens of photography and as a body of artworks that reinforce the effects of one another within the context of their immediate reception.  Rather than solicit some kind of historical defense, I think the photographs can exist on their own terms, thereby inviting broader appreciation and interpretation.  On the other hand, if there is still a need to discuss the remains of Matisse within the same frame (gallery context) as the fallout of such current daily events as local bombings, then perhaps this grouping of photographs demands greater attention as light records of fiction rather than fact.  And how would our attentions shift in these if they contained irrefutable details of what hovers about them? My guess is that we would stop seeing them as fleeting, timeless records of a fall (paper, petals, light, human et al) and more like everyday photojournalism. I'm glad that they retained their poetic license.
Posted by Justin Lowman