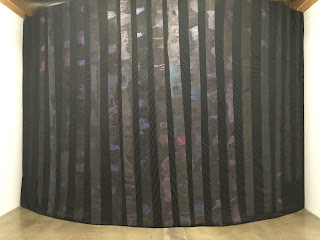 Inaccessible space (music playing from the other side of the fabric barrier). Alternating, vertical stripes (fabric/painted). Which side are we on? In or Out? As if it were that binary? 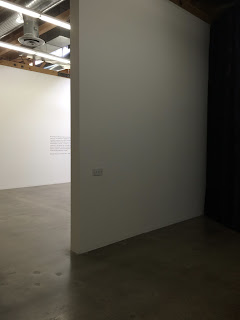 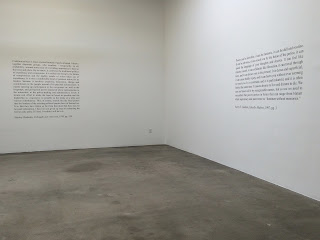 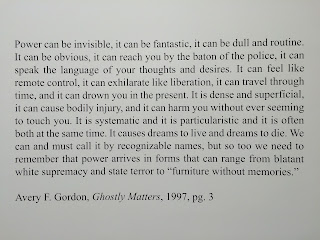 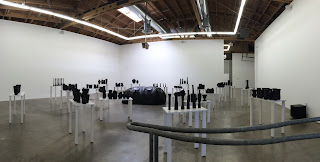 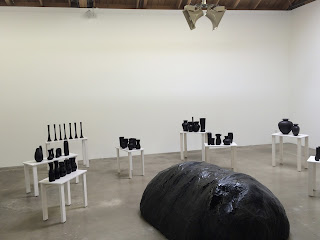 Empty black vessels stand atop white furnishings congregated loosely around a central form (black organic shape (solid or not) which contrasts with hard-edge furniture and vessels) and radiating sound from two central speakers (a relatively coherent voice, overhead) facing opposing directions. Surrounding sounds mingle with other abstract incoherent sounds (the perimeter, peripheral) from elsewhere.  With the alignment of two speakers directly above the rock-like form, it's not hard to think of head and body or god and land (planet). Whatever the metaphor, images of surveillant power, omnipotent, panoptic views reverberate. 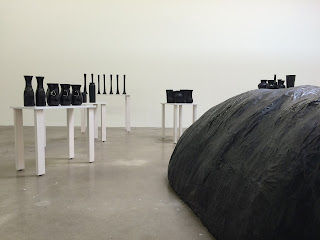 Unfulfilling projected words despite compelling sound and image... Ultimately, the spoken words do not fill these vessels. No one is listening in this empty room.
Posted by Justin Lowman