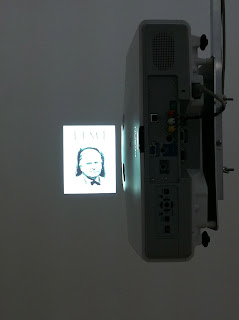 Despite my lowly iPhone's built-in camera's inability to capture any one image from this continuous stream of magazine cover footage (which may also say something about optical perception more generally, even in a human body), it was fun to see which one I would catch. Unfortunately, also due to technical issues outside the work, the image appears in black and white. Despite my own shortcomings and playfulness, I think the point was well-taken about watching a stream of historical images flicker by, again at eye-level for the average adult (which was a nice touch. The other was that the projected imaged was the same size as an actual TIME magazine cover).  Once my 2:30 minutes were up, I moved on to Cameron Gainer's video installation in the next room, also about time, but perhaps being much less of a one-liner than this one here.
Posted by Justin Lowman