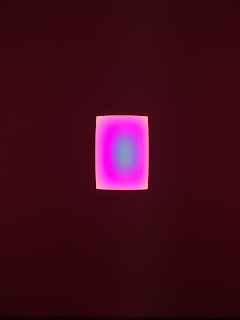 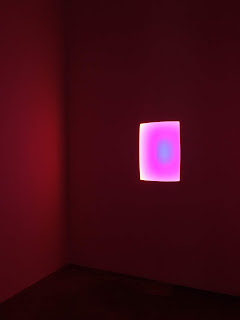 Sometime in the summer of 2000 for the first time, I came across a large body of Turrell's work at the Scottsdale Museum of Contemporary of Art in Arizona.  Seeing certain works, especially the ganzfeld works, they profoundly changed the way that I would think about the possibilities of art, painting in particular, and the effects of light and color specifically.  It seemed that painted pigments other than reflective whites would eventually fall by the wayside as light itself would become a focal point of my own artistic investigation.

Over the past twenty years, my interest in this work has waned some, especially where small lozenge works like the one pictured above apply.  I have said it before in this blog, but these glass-surfaced light works seem like a regression; they resemble the early holes in the walls with light provided by CRT television sets.  The only difference now is that it seems the CRT itself is reinvented and situated in the wall.

While the colors may be pleasing enough, they don't seem to challenge nor push concepts of being nor perceptions about bodies in space.  Such things easier said than done, perhaps they hold an important place in the Turrell portfolio, especially where such works may fund larger ones, for example, the Roden Crater, somewhere in the northwestern Arizona desert. I'm looking forward to completing the circle by visiting this earthwork when it is open for public-viewing. Until then, I will likely bypass future iterations of these wall works. What can I say? I mean, even Pluto has been demoted.