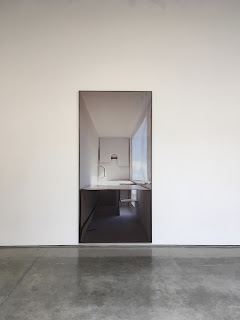 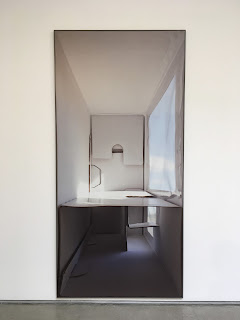 Work space.
Space of occupation.
Cubicle.
Productivity without product (an important question for art to be sure). 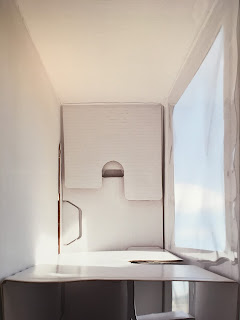 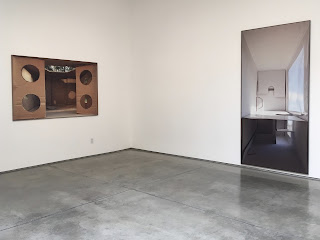 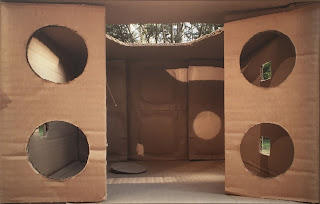 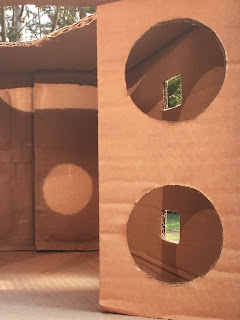 A view onto nature. 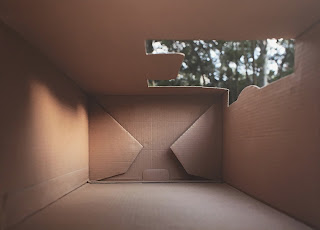 Irregular aperture is a nice variation from the more typical and convenient basic geometries that seems to pervade such forms. Thus, there is a greater balance between organic/inorganic formally and therefore conceptually. 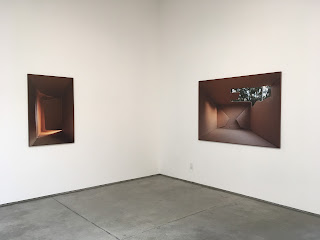 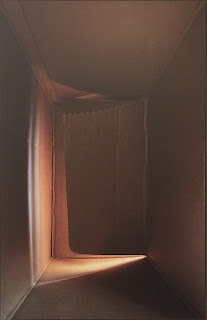 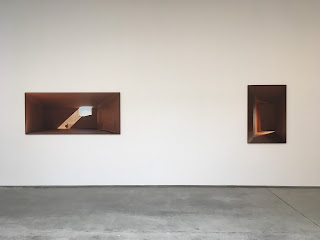 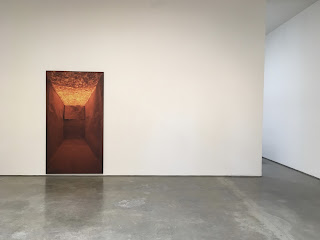 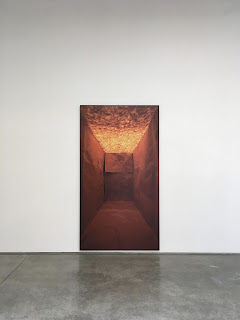 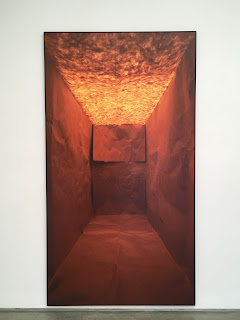 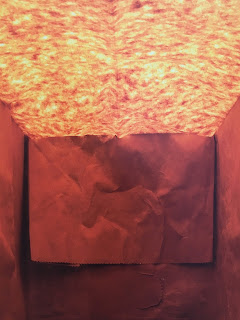 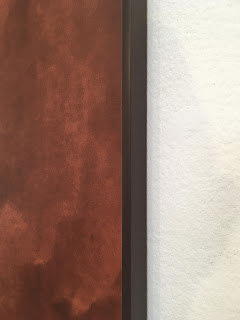 Seeing the large in the small, the intimate in the mundane (quotidian objects or their relative absence) is a familiar subject not just to art and its history, play more generally, but also to my own art practice which utilizes architectural frameworks and its signs to embrace phenomenological conditions noted through the passage of time and light while simultaneously flattening such remote, abstract concerns with grounded realities such as those found in cardboard boxes, here appropriated/repurposed artifacts presumably from a recycling bin. At least, I'm assuming that Koch is not fabricating these boxes specifically for these photographs. The beauty in their modesty and happenstance (readymade) qualities would be deflated by such an invented intervention, though a certain redundancy/inefficiency, might actually be a nice friction/deviation from the expected. (In the way that Thomas Demand works).

That said, I get the feeling these photographs are more about the joy of discovery and imagination just as a child or even a cat would encounter an empty box.  In fact, one of the titles as Cat Food connects this to me in multiple way not the least of which is a tempting adage such as cat out of the bag or similar.  Cat Food is the one I like best here, likely because of its subtle, material relationship to light and color not to mention its integration within the exhibition space which such together sets up a complicated set of relations between presentation and re-presentation. In fact, this seems to be toward the essence of these works, photographs that are scaled and hung like architectural features themselves (doors/windows).  While I have been talking about the subject and a suggested space, the works themselves are (obviously) only a proposal for such intimate spaces, again spaces afforded by every day detritus, the results of mass, commercial endeavors of all kinds, not things as the shows title suggests.

Whatever the space we occupy as viewer, tt’s fun to play with model and scale while viewing these works.  The proposal of modest, found materials, as exceptional interiors is quite seductive for some of us. How light informs/interacts with such spaces is appealing as well. That’s the space of representation, photos that depict the illusion of depth and invite conceptual participation. A bit of a tease, more so as a result with how some of them are hung and any kind of direct involvement, they still seem to operate similar to how a distant James Turell would, as one example. Part door, part window,  quiet, contemplative, warm, light-effect mediations, one is held in a similar kind of balance between seeing and being, again remote like childhood memories of building within such cardboard worlds.  On a slightly different note, who knew cardboard would become such a hot commodity as it pertains to the world we live in over the past twenty years or so? In a pre-Amazon world, its ubiquity and value could not possibly have been predicted.

Slightly disenchanted by the specificity implied in the titles myself,  I doubt it matters what the former contents of these shells (packaging boxes) were nor is it indicated directly in the work. All the signs of the works within and without speak clearly enough on their own terms while also inviting interpretation  Perhaps rather than feeling disenchanted, what I mean to say is disappointed, because the titles seem unnecessary and only ground/distract the work from its seeming aims in terms of light, form, and space (and I'm basing this on previous works that I have viewed by Koch at this same gallery (see here)). So, knowing the source of these boxes, what they refer to momentarily in the commercial exchange, does not heighten my experience in viewing them; they come as more of a distraction because we already get, by the photographs themselves, that these are cardboard boxes, things with which we are more than familiar in all their forms, and they are just as ephemeral as the phenomena which are housed within them.

On the other hand, the titles with the boxes may do something more. They may signify in their specificity a human, and quite possibly, a concern for thoughts about a post-human condition.  Slightly skeptical of this dystopia in vision, the absence of products and therefore industry simultaneously produces human as product, which can be a slippery and frightening alternative to the current situation, which may be at the root, I believe, of Koch's concerns, concerns that seem to value the presence of human interaction despite what all the visual absences celebrate.  Alas, I viewed and contemplated these works alone.