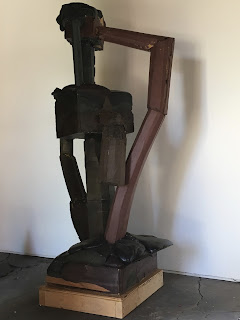 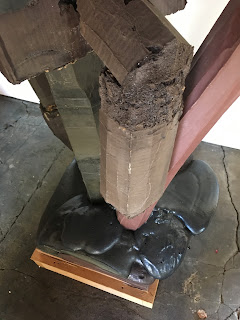 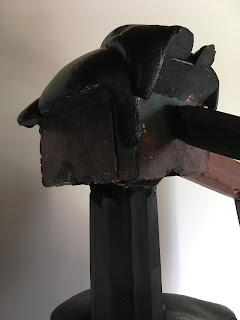 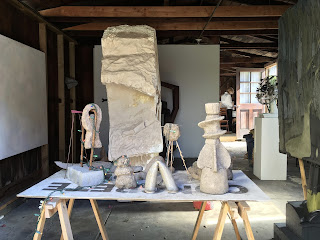 At the very back of this photo is the first work in this post; I wish I could have had this view minus the foreground elements (the working table).  The connectivity and balance within this single form was enough to communicate what the rest of the show cluttered.  I kept seeing thinker or self-inflicted, ocular wound, somehow fitting whichever way. Along the side of this same photograph is the other work of interest, one more preoccupied with painterly amalgamations upon a cast form favoring two rather than three dimensions despite its physical volume. See below. 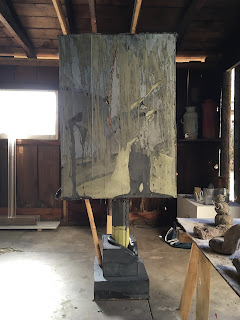 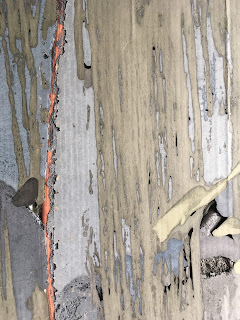 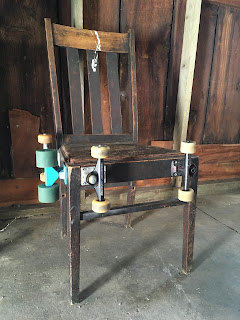 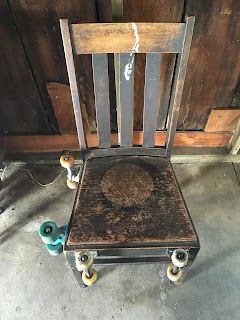 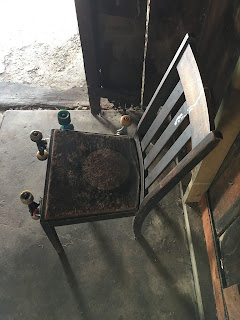 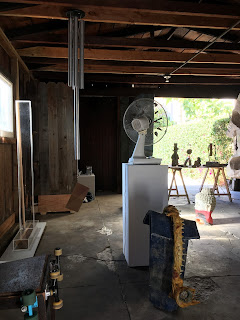 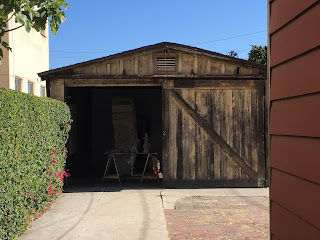 So many garages across American are filled with stuff, somewhere between utilitarian (functional/useful) and refuse, disuse, discard, etc... At once it is both a sign of living, overconsumption, disorganization, and (aesthetic) resourcefulness, which is to say retaining items for their artistic (non-functional) potential, especially in their latent possibility, which is to say their potential energy, awaiting a moment to be set in motion, yet caught in a collective balance...

We know this stuff, this setting.  Michael McMillen's "The Central Meridian (aka The Garage" at LACMA hardened such a state as art installation in a museum context (see here) and Dario and Tedeschi revel in a similar context and playfulness that continues between solidifying empty forms and activating readymades of all kinds, especially those that imply motion. It conjures this backyard trope, the garage as space for exploration, a place to simultaneously get away from and engage with it all, a perfectly legitimate leisure-time activity.

In this disorganized chaos of Dario and Tedeschi, there were moments of static restlessness combined with reason, deliberate and obvious tinkering.  These are the ones I attempted to isolate within a photographic frame, something the actual viewing did not exactly allow for but worth remembering in their current state/form, at least momentarily so, anyway.  None of the works suggested solidity and permanence in any kind of substantial way, and I took this as one of their main points.  All seemed temporary and on the move either with respect to concrete imagery (skateboard wheels on chair, ceiling fan) or by material quality (dripping paint on cast cardboards or similar, expanding foam frozen in time, stop-gap efforts to contain).  Therefore, an appreciation of time (a spatial displacement) was to be thought about contextually, formally, and conceptually.

Whether one wishes to view the work and its setting as garage sale or end of the season blow-out or other, it's at least worth considering the ideas and subsequent value that surrounds such activities (the valuation and re-eavaluation of materials/objects in such a context: an old garage in an old nondescript part of town,) ultimately, works to be displayed in an antiquated backyard setting that recapitulates the everyday signs so many of us know so well from now and then.