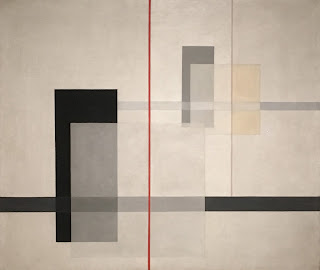 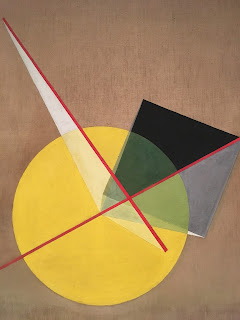 Yellow Circle and Black Square, 1921
Oil and graphite on canvas 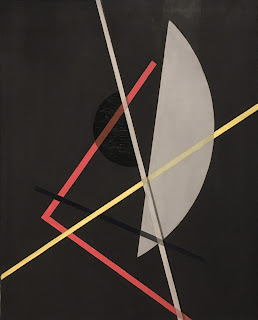 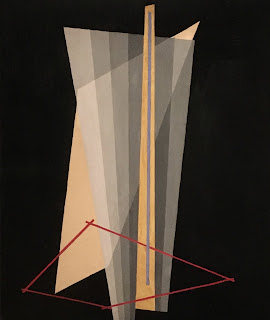 Construction, 1922
Oil and graphite on panel

I wish I had taken a little more time to learn about this image from the "Room of the Present" installation. It caught my attention; recalled Giacometti's "Palace at 4AM" in some way; and struck me just how present this picture and form coheres with my own work right now.  Maybe the viewing and this image is enough not to mention the myth and drama that surrounds the realization of this particular installation from its initial inception until now.  The space of unknowns and shifting thoughts and perspectives seems rich enough as it pertains to this work as well as others.

In general, I did not scour this exhibition the way I normally would.  Namely, I think it is due to the fact that it was both an overwhelming amount of material; work that registered quickly and easily: and I had recently seen a much smaller body of work at the Santa Barbara Museum of Art (see here) and felt in many respects that I had seen enough.  I'm intrigued by the concepts but only some of the forms that these works take whether they be physical or pictorial. On the latter, the Santa Barbara show was focused on paintings for the most part and this seemed adequate to my interest. With Moholy-Nagy's self-professed concern for shifting, pictorial spaces (painting concerns to be sure), this more recent cursory view also seemed to suffice as the catalogs and other books capture much of what is needed to take in these works.  Somehow it became an all or nothing situation. Perhaps this is  the case as one either apprehends a single view or conversely and continuously, slips into an infinite number of views that no amount of documentation can provide not even video, though someone like Michael Snow may have tried.  Further, and for whatever reason, I found such works, the kinetic sculptures to be much less engaging and therefore not as useful. These are the ones that I suspect the Zero Group in Germany were most fond of.  Sure they are tantalizing for a moment, but their durational substance seems modest at best, kind of like a pin wheel or a fidget spinner. Perhaps, they are too easily digested (perceived) all at once, and that's it, fad-like.  And so it was despite certain challenges and opinions satisfying to enjoy other fixed works in the exhibition albeit with less  interest in my own documentation and more so with the activity of looking.