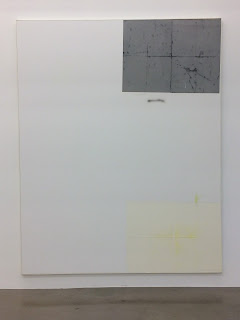 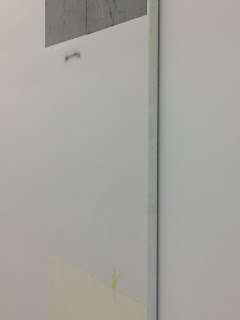 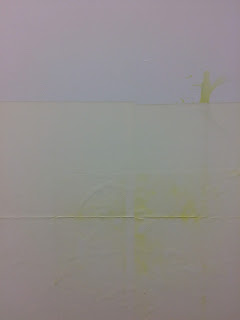 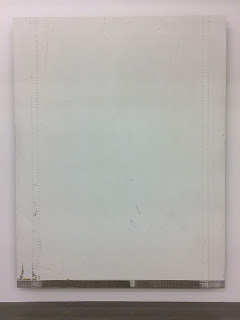 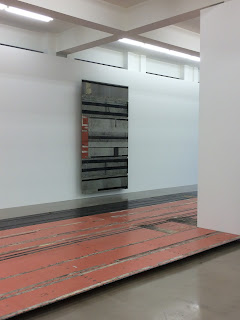 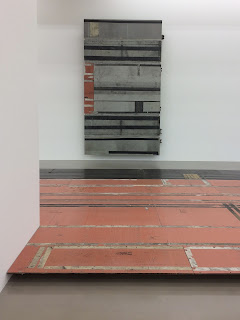 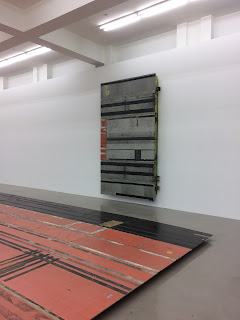 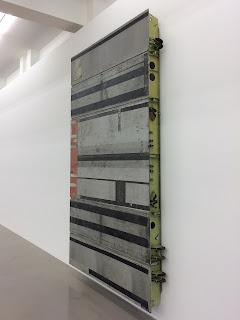 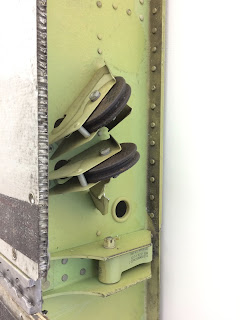 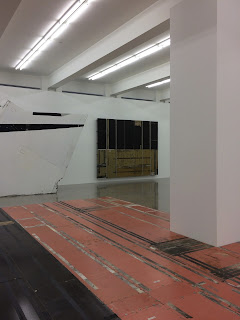 Tabula non-rasa.
Aircraft floors onto a wall; classic flatbed move (Rauschenberg and Pollock,  not to mention sand paintings--- all things ephemeral in their time, vanishing from ground to wall to beyond). 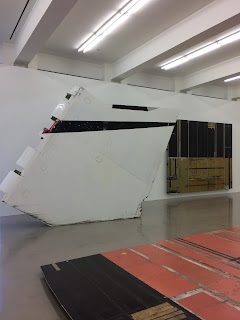 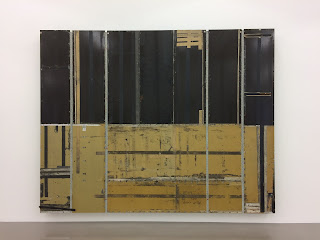 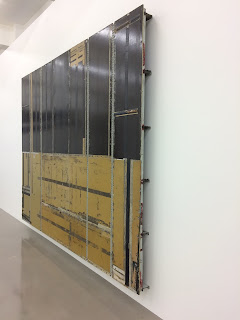 Marks and remnants of time.

Upon initial viewing of this exhibition of flippant, abstract paintings (faint, whites, grays, and yellows) and modified airplane parts (mostly cargo floors), I was ready to dismiss easily as either being too familiar and too crowded as an installation. That said, something became compelling as it pertains to sign of times, reclaimed obsolescence, and formal flattening, let's call it.  Which is to say, these are all things that artists I like seem ready to embrace, namely a complication between formal distinctions dimensionally and perceiving time by such means as factors above human and non-human intervention.  Reorganizing scattered and broken elements into this exhibition, I believe, also speaks to some kind of thought of unity or lack thereof which becomes political rather than merely formal. Of course, they are, ultimately, inseparable notions.  The question is how direct, spelled out or obvious.

Returning to the airplane parts, whereas Duchamp somehow holds sacred, something here in these assisted readymades is not quite whole, perhaps also because we've seen this before with artists using the sides of trailer as an idea about painting. I'm blanking about where I saw those, but then maybe that's part of my point as well.  The memorable can often be its own reward.  So, to fetishize without transformation rather than simple displacements leaves something to be desired (which doesn't seem to be the point with any of these works). Moving objects from junk yards into galleries certainly has its history.  Moving objects between floor and wall as well (Curious too that Beer or Wine is listed as wall work on the checklist but appears on the floor in the viewing).  Granted, they are strong decisions. I'm just not sure what it adds up to rather than large-scale assemblage rehash that contemplates the passage of time through detritus of the moment, in this case vessels for human travel. Come to think of it, the passage of the mark-makers (Cf. the surfaces of paintings and parts) seems to be the point, the point about a post-human condition.  Now, that is something to think about. And maybe this isn't the first time we've had to consider this kind of situation.

And near blankness may be an interesingt place to consider the painted paintings in this show.  Spare and abstract, they seem to hold keys for how to look at the found objects as much as how to navigate the exhibition at large. So, painting and found object are held in a kind of reflection/parallel where patina holds its key.  Air traffic has been grounded and blown apart seems to be a nod to a post-9/11 world as well as nod to how things traffic in general, which could be the best explanation for why to have so many objects in one congested spaces. Not a notion of immersion I am sure (like gazing into a Barnett Newman at close range).  So, rather than crowd the spaces as is (an assertion of concept over viewing), why not have simply one object of each kind.  Such notion of emptiness and formal complicity would then have room to work within the viewer. For, again, the exhibition as a whole does seem to be about absence and how a ship has sailed and interchangeability seems key. Indeed, nothing happened.