While I can appreciate a populist viewing of this installation as being a good one, it also was not without its shortcomings.  What I mean to say is that typically Turrell's work and work like his require larger viewing durations, ones in relative quiet, ones that would allow for contemplation and observation prior to conversation.
While I was able to find a couple of quieter moments here and there (a corner, a floor, an extended thought of almost a minute!), it was mostly a visual feeding frenzy as crowds filled in around the main floor vying for optimum viewing positions (reclining against a wall, standing neck up or lying on the floor in a circle of mats, viewers all squeezed together at a slumber party).
Overall, it seemed that lying on the floor at center was best. So, I patiently waited for my turn after having reclined on the wall, walked the building top to bottom, noted the general mise en scene of the installation and the museum showing at large. Before taking the floor, I wondered why Turrell hadn't used the entire museum more productively.
While circulating the ascending/descending halls/galleries of the central space I felt significantly "outside" of the exhibition, the museum, etc... I could have been back stage at just about any event anywhere, except that I knew the spiraling, sloping floor to be that of Frank Lloyd Wright's Guggenheim design.  I thought for sure Turrell would have taken on more of the whole museum with such an opportunity, a large-scale immersive installation at a major US art institution.  Each gallery alcove could have been integrated to the central work, "Aten Reign." (A title not without its problems to be sure. Of course, Turrell has a history of such.  Rather than objectify the work with such titles, it appears, to me, grandiose and absurd). But, I digress.  Overall, I was really hoping to see how the central space of the museum would have worked with the adjacent galleries, and I consider this presentation a missed opportunity on that account. I couldn't help but think about Dan Flavin's light installation at said museum in 1992.
So, what was there were elliptical tiers of light that changed color through relatively short durations.  Perceptually, there was not much to write home about other than that some colors really do look nice as they fade from one into the other. How divisions of space appear solid and transparent in kind by such juxtapositions of vertical depth is kind of interesting.  Another way to say this is, while lying on the floor at the approximate center of the work staring upward, the materiality of light was clearly dependent on viewing distance in relationship to the quality of color and light intensity.  This, I believe, was a success and what Turrell has been asking a viewer to consider all along; that light has mass and when properly tuned (color) and framed (spatially), such can be revealed. Now, the next question is, so what? If I'm not there to prove science, and I'm not there to quietly consider phenomena, what am I doing staring toward the oculus through the rotunda at the Guggenheim Museum, New York?
Aside from listening to obnoxious conversation about what was seen (Pink Floyd or Grateful Dead fans, for example, would have agreed) and making a few acquaintances, really nice conversations actually, the whole visual concert seemed more like an exercise to see how such work, work that normally occupies the nether regions of Western space, would look within a major, urban art center. The results were mixed but one thing was surely consistent with current art trends.  In order to compete, art must be a multi-ring circus (at least for those of us with general admission). Prior to the show's opening, I'm certain James Turrell, the Guggenheim Director and a handful of others had the kind of viewing experience of "Aten Reign" that I would have liked best, one that celebrates populism in a slightly different way where viewing and experiencing is primary and the social dialogue is secondary.  You don't really talk through a movie in a theater do you? 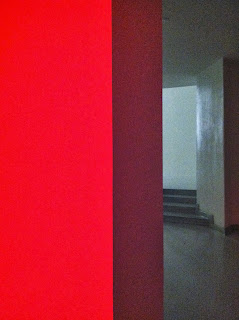 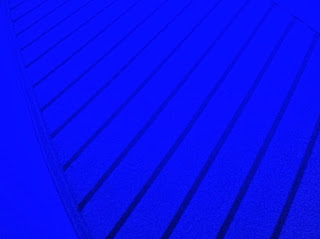 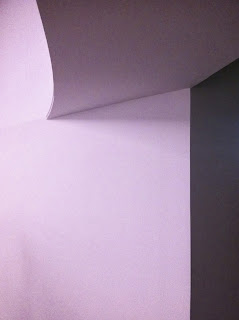 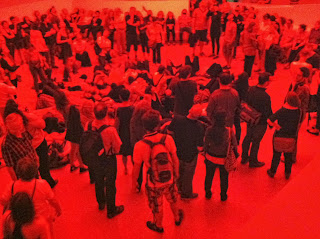